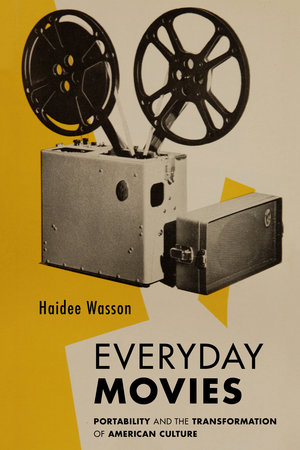 By Haidee Wasson, author of Everyday Movies: Portable Film Projectors and the Transformation of American Culture This guest post is part of our #SCMS2021 conference series. Visit our virtual exhibit to learn more. Have …

Haidee Wasson is Professor of Film and Media at Concordia University, Montreal. She is author of the award-winning Museum Movies and coeditor of several books, including Useful Cinema and Cinema's Military Industrial Complex.

"A definitive accounting of the rise of small-gauge film cultures in the United States. Through meticulous research, sophisticated argumentation, and a strong sense of what was truly significant about portable cinema, Wasson has written a book that will help ensure, from now on, that film historians, theorists, and students think of the cinema as belonging not just to the theater, but also to the portable projectors that made movies possible everywhere they went."—Film Quarterly

“Everyday Movies is a gamechanger in film and media studies in the way it moves the scholarly gaze away from film and cinema towards a focus on the portable projector. In doing so, it brings to light the ways in which most people throughout a large part of the twentieth century interacted and consumed films in a multiplicity of locations and formats outside of the dominant cinema space.”

"Haidee Wasson's Everyday Movies complicates notions that movie theaters were the most popular means of access to the moving image in the United States before the 1950s by emphasizing the widespread and varied uses of portable projectors. . . . Everyday Movies presents a remarkably useful set of tools for understanding the state of America's current media landscape."—Spectator, USC Division of Cinema & Media Studies

"Through her decades of meticulous archival research for this book and other projects, Wasson has challenged scholars to carve out a rightful place for small-gauge filmmaking in American film history and other national film cultures. Her work suggests we might do well to reexamine the term nontheatrical cinema itself."

"Exhaustively researched and exquisitely written, Everyday Movies is the first truly twenty-first-century history of twentieth-century film. Where cinema history has prized theatrical exhibition, Haidee Wasson shows that mobility is the central term for cinema history. Where film theory has fetishized a single kind of apparatus and spectator, Wasson reveals the wide range of people, institutions, and practices that defined what movies are and what they can do.”—Jonathan Sterne, author of MP3: The Meaning of a Format

"In this captivating book, Wasson moves film history out of the theater and into the varied spaces of portable projection at world's fairs, military zones, stores, classrooms, workplaces, and more. More than just history of technical inventions, Everyday Movies looks seriously at a virtually overlooked device that transformed experience in twentieth-century life. Brilliantly researched and full of surprises!"—Lynn Spigel, author of TV by Design: Modern Art and the Rise of Network Television

"Everyday Movies is irresistible. Wasson directs our gaze in the unlikeliest of directions and then ends up reframing almost everything we thought we knew about film in America during the extended moment of classical Hollywood cinema."—Lisa Gitelman, author of Paper Knowledge: Toward a Media History of Documents

"Rather than discussing portable projectors as something on the fringe or periphery of film culture, Wasson repositions them in the center––as the norm for film viewing for much of the twentieth century. We come away seeing how the story of American film is also the story of big business, the military, public education, and information management systems. A highly ambitious and significant contribution."—Eric Hoyt, author of Hollywood Vault: Film Libraries before Home Video

"This book offers a striking and important new perspective on cinema history, cultures, and institutions, as well as on media's intertwining with American social and economic history. While the technologies it examines are small, the questions it asks are big and consequential. Everyday Movies will have resonances far beyond its primary fields."—Alice Lovejoy, author of Army Film and the Avant Garde: Cinema and Experiment in the Czechoslovak Military 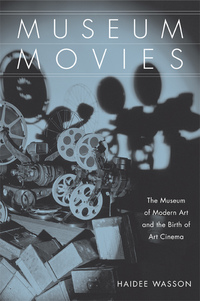