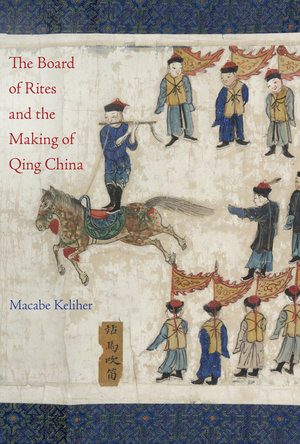 The Board of Rites and the Making of Qing China presents a major new approach in research on the formation of the Qing empire (1636–1912) in early modern China. Focusing on the symbolic practices that structured domination and legitimized authority, the book challenges traditional understandings of state-formation, and argues that in addition to war making and institution building, the disciplining of diverse political actors, and the construction of political order through symbolic acts were essential undertakings in the making of the Qing state. Beginning in 1631 with the establishment of the key disciplinary organization, the Board of Rites, and culminating with the publication of the first administrative code in 1690, Keliher shows that the Qing political environment was premised on sets of intertwined relationships constantly performed through acts such as the New Year’s Day ceremony, greeting rites, and sumptuary regulations, or what was referred to as li in Chinese. Drawing on Chinese- and Manchu-language archival sources, this book is the first to demonstrate how Qing state-makers drew on existing practices and made up new ones to reimagine political culture and construct a system of domination that lay the basis for empire.

"[Keliher] has produced an extremely valuable and well-balanced work that will stand the test of time."—China Review International

"This is an inspired work of institutional history that is likely to alter how Chinese and foreign scholars have understood late imperial China. By way of close readings of archival Manchu sources, Keliher has produced an astonishingly well-documented study that demonstrates the distinctive administrative inventions of the Qing and elevates the Manchu legacy to its proper place as the maker of modern China as we know it."—Lionel M. Jensen, Faculty Fellow at the Liu Institute for Asia and Asian Studies, University of Notre Dame

"Keliher's remarkable monograph has much to offer early modernists working on state/empire formation, institution-building, and ceremonial and ritual. While paying full attention to the specificities and intricacies of Qing rituals, Keliher convincingly invites us to rethink the ways in which political and social power was constructed and deployed in early modern Eurasia."—Kaya Sahin, Associate Professor of History, Indiana University

"By analyzing the creation of the Qing Board of Rites during the seventeenth-century Manchu conquest, Keliher persuasively argues for the importance of ritual symbolism in the legitimation of China’s last dynasty and enriches our understanding of this facet of Qing state formation."—Evelyn S. Rawski, Distinguished University Professor Emerita of History, University of Pittsburgh

PART ONE. CONTEXT
1. Introduction: Li and the Qing State
2. The Manchu Ascendancy and Struggles for Power

PART TWO. FORMATION, 1631–1651
3. The New Year’s Day Ceremony
4. The Institution of the Emperor
5. The Administrative Order and Its Enactment

PART THREE. INSTITUTIONALIZATION, 1651–1690
6. Imperial Relatives in Service of the State
7. Completing the System: The Case of Imperial Dress
8. Codification: The Da Qing Huidian

Appendix One: Sons and Grandsons of Nurhaci and Šurhaci
Mentioned in the Text
Appendix Two: Banner Lords under Nurhaci and Hong Taiji
Appendix Three: A Note on Sources
Abbreviations
Notes
Bibliography
Index