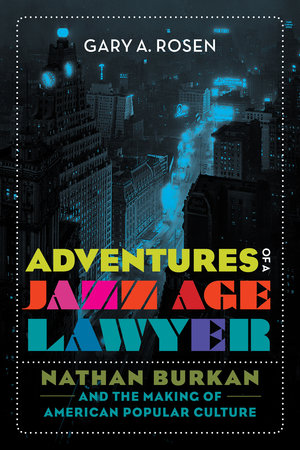 Adventures of a Jazz Age Lawyer is the lively story of legal giant Nathan Burkan, whose career encapsulated the coming of age of the institutions, archetypes, and attitudes that define American popular culture. With a client list that included Charlie Chaplin, Al Jolson, Frank Costello, Victor Herbert, Mae West, Gloria Morgan Vanderbilt, Arnold Rothstein, and Samuel Goldwyn, Burkan was “New York’s Spotlight Lawyer” for more than three decades. He was one of the principal authors of the epochal Copyright Act of 1909 and the guiding spirit behind the American Society of Composers, Authors, and Publishers (Ascap), which provided the first practical means for songwriters to collect royalties for public performances of their works, revolutionizing the music business and the sound of popular music. While the entertainment world adapted to the disruptive technologies of recorded sound, motion pictures, and broadcasting, Burkan’s groundbreaking work laid the legal foundation for the Great American Songbook and the Golden Age of Hollywood, and it continues to influence popular culture today.

Gary A. Rosen tells stories of dramatic and uproarious courtroom confrontations, scandalous escapades of the rich and famous, and momentous clashes of powerful political, economic, and cultural forces. Out of these conflicts, the United States emerged as the world’s leading exporter of creative energy. Adventures of a Jazz Age Lawyer is an engaging look at the life of Nathan Burkan, a captivating history of entertainment and intellectual property law in the early twentieth century, and a rich source of new discoveries for anyone interested in the spirit of the Jazz Age.

Gary A. Rosen has practiced intellectual property law for more than thirty years and is Adjunct Professor of Law at the Kline School of Law at Drexel University. He is the author of a book on popular music and copyright, Unfair to Genius: The Strange and Litigious Career of Ira B. Arnstein, and he writes a blog on law and popular culture called Jazz Age Lawyer (www.jazzagelawyer.com).

“A thoughtful and in-depth look at the substance of many foundational cases in the history of entertainment history.”?—Bowery Boys Podcast

“Reflective, detailed examples of Burkan's impact on music and film. This is the only detailed examination of this subject, and it will be important for those interested in entertainment law and popular culture.”—CHOICE

“A captivating look at an American original. . . . Rosen’s a good writer with a fun story to tell, and his enthusiasm makes Jazz Age Lawyer a delightful read. He loves these characters.” —Splice Today

“Lively new biography. . . . Much of Burkan’s work has lasted right up to the modern era and the digital challenges that have upended the music business. Burkan’s legacy of protecting and encouraging ongoing creative output, according to Rosen, helps assure that art continues to reflect the time in which it is made.”—Media Industries

“Adventures of a Jazz Age Lawyer rescues a key figure in early twentieth-century popular culture from (relative) obscurity and tells his fascinating story with insight and style. I don’t know of anyone who writes about popular music more knowledgeably, penetratingly, and elegantly than Gary Rosen.”—Ben Yagoda, author of About Town: The New Yorker and the World It Made and The B Side: The Death of Tin Pan Alley and the Rebirth of the Great American Song


“Gary Rosen is a born storyteller. This is both a first-rate story and a previously untold one.”—Peter Jaszi, Professor Emeritus, American University Law School

“With its engaging characters and intriguing plot, this book reads like a literary novel. Without trying to ‘analyze’ Nathan Burkan, Gary Rosen gives a clear and moving picture of his character, both his flaws and virtues. In the course of tracing Burkan’s career, Rosen provides fascinating historical background peopled with such colorful characters as Victor Herbert, Charlie Chaplin, and Gloria Vanderbilt.”—Philip Furia, author of The Poets of Tin Pan Alley

“A lively, in-depth, and unprecedented portrait of Nathan Burkan, one of the most famous American lawyers of the twentieth century and a pioneer of intellectual property law. Gary Rosen presents Burkan as situated at the eye of a legal and cultural storm created by the advent of entertainment culture. Burkan—with his legal brilliance and panache—would do so much to shape that culture. This book is both a biography of an important legal figure and a history of jazz-age popular culture and entertainment law, all in one.”—Robert Spoo, author of Without Copyrights: Piracy, Publishing, and the Public Domain

“While Nathan Burkan is a lawyer you’ve probably never heard of, his courtroom battles on behalf of popular entertainers like Charlie Chaplin and Mae West were often filled with salacious tales of the rich and famous, and the trials involving gangsters like Frank Costello and Arnold Rothstein are an enduring part of American social history. This book is a great read!”—Howard Suber, coauthor of Creativity and Copyright: Legal Essentials for Screenwriters and Creative Artists

“Known to legal scholars as the ‘Moses of American copyright law,’ Nathan Burkan was much more. Burkan represented an A-list of celebrity clients in causes ranging from copyright infringement and criminal defense, to high-society divorce and custody battles, touching nearly every legal cause célèbre in the first third of the Twentieth Century. Rosen brings Burkan’s story to vivid life in a meticulously researched, well-paced biography.”—Kevin Parks, author of Music & Copyright in America: Toward the Celestial Jukebox

“This is a wonderful book?fast-paced, lively writing, a fascinating subject. Captures the spirit of that (alas!) long-gone age and paints a truly engaging portrait of a quite remarkable man.”—Paul Goldstein, author of Copyright’s Highway: From Gutenberg to the Celestial Jukebox

PART ONE. LEG SHOWS AND LONGHAIRS
1. Immigrant Passages
2. The Pittsburgh Troubles
3. To Victor Belong the Spoils

PART THREE. BENDING THE FIRMAMENT
8. Entr’acte
9. The Lone Star
10. Charlie in the Harem
11. The Price of a Good Time

PART FIVE. CHIEF OF JUSTICE OF CELLULOIDIA
16. The Silent Screen
17. The Jazz Singer