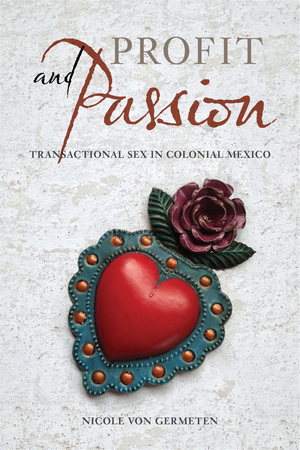 Colonial documents and works of literature from early modern Spain are rife with references to public women, whores, and prostitutes. In Profit and Passion, Nicole von Germeten offers a new history of the women who carried and resisted these labels of ill repute. The elusive, ever-changing terminology for prosecuted women voiced by kings, jurists, magistrates, inquisitors, and bishops, as well as disgruntled husbands and neighbors, foreshadows the increasing regulation, criminalization, and polarizing politics of modern global transactional sex. The author’s analysis concentrates on the words women spoke in depositions and court appearances and on how their language changed over time, pointing to a broader transformation in the history of sexuality, gender, and the ways in which courts and law enforcement processes affected women.

"Profit and Passion offers a fascinating glimpse into the colonial archives that is useful and informative for historians and literary scholars alike. Von Germeten restores these women’s voices to historical accounts of their identity, and her nuanced approach to the mediated nature of the discourses will help to bring much-needed caution to our reading of these types of records."—Journal of Interdisciplinary History

"Profit and Passion: Transactional Sex in Colonial Mexico, Nicole von Germeten relocates women’s sexuality to the center of imperial geographies. She not only charts the history of transactional sex in New Spain from the 1500s to the early nineteenth century, but links the theme to the changing status of women, their economic and domestic activities, their relationship with the state, and the category of respectability. This book is therefore an important contribution to the extremely limited literature on prostitution in New Spain, to the growing body of works on the history of sexuality in Mexico, and to our understanding of women’s history in the colony."—H-Net Reviews

"Von Germeten adeptly frames her book within the concerns of current-day sex worker activists, and in keeping with these, in her historical treatment she foregrounds the agency and motivations of the practitioners she studies. Instructors will, no doubt, find this an attractive text to assign in undergraduate and graduate classes; the detailed histories of the individual women she studies effectively animate her work."—American Historical Review

"Provides a very rich analysis and opens up this topic for an Anglophone audience. . . . An important addition to the scholarly literature on gender in colonial Latin America and sexuality studies."—Hispanic American Historical Review

"Profit and Passion provides an innovative analysis of the lives of women classified as whores and procurers in colonial Mexico. Nicole von Germeten also gets us to think about the ways in which the women described here—whores, prostitutes, and procurers—have particular kinds of voices in the archive. This book should change the ways that we understand sexual commerce in colonial Latin America."—Pete Sigal, author of The Flower and the Scorpion: Sexuality and Ritual in Early Nahua Culture

"Profit and Passion is the first English-language publication to delve deeply into colonial Mexican archival narratives of women who sold sex and who engaged in other forms of sexual commerce and affective labor. As such, it makes a welcome addition to the historiography of gender and sexuality in colonial Latin America, and it does so by offering readers a critical, self-reflexive lens through which to view as historical subjects these women and adolescents and humanize their everyday experiences and decision-making processes. The book combines literary analysis, archival theory, and in-depth historical research to weave together narratives of women whose lives resist easy categorization especially given their complex lives and choices."—Zeb Tortorici, author of Sins against Nature: Sex and Archives in Colonial New Spain

"Building on her reputation as one of best researchers in Latin American history, von Germeten delivers with this new book. Written elegantly, Profit and Passion offers a superb analysis of female sex-workers—described variously as bawds, procuresses, whores and prostitutes—as Spanish American politics and culture reflected ambiguous attitudes toward sex work and as sex workers sought to claim ownership over their own bodies and public lives. Von Germeten’s work adds an important historical dimension to debates about sexual agency of sex workers and their complicated relationships with their clients. This historical treatment of the issue—handled with grace, humor, and von Germeten’s characteristic deep archival readings—will be especially valuable for a twenty-first century reading public, which will appreciate the subtle assessment of an issue often treated with sensationalism. A delight to read and a tour de force of scholarship."—Martin Nesvig, University of Miami 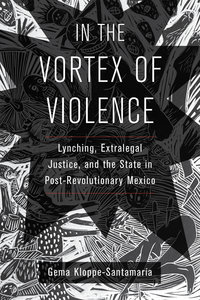 In the Vortex of Violence