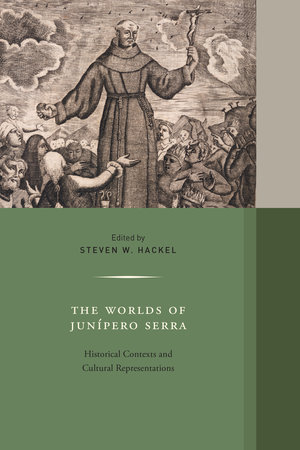 The Worlds of Junipero Serra Historical Contexts and Cultural Representations

As one of America’s most important missionaries, Junípero Serra is widely recognized as the founding father of California’s missions.  It was for that work that he was canonized in 2015 by Pope Francis.  Less well known, however, is the degree to which Junípero Serra embodied the social, religious and artistic currents that shaped Spain and Mexico across the 18th century. Further, Serra’s reception in American culture in the 19th and 20th centuries has often been obscured by the controversies surrounding his treatment of California’s Indians. This volume situates Serra in the larger Spanish and Mexican contexts within which he lived, learned, and came of age. Offering a rare glimpse into Serra’s life, these essays capture the full complexity of cultural trends and developments that paved the way for this powerful missionary to become not only California’s most polarizing historical figure but also North America’s first Spanish colonial saint.

Steven W. Hackel is Professor of History at the University of California, Riverside and the author of Junipero Serra: California’s Founding Father, Alta California, and Children of Coyote.

"Hackel has put together an intelligent collection of essays that explores the historical worlds that created Serra and illuminates the contested representations of him. The collection is emphatically multidisciplinary . . . And it is decidedly global, both in the contexts in which it considers Serra and in its contributors.—The Journal of American History

"The Worlds of Juni ´pero Serra engages an academic and political landscape in which questions of colonial inheritance, national identity, immigration, and indigeneity have become increasingly fraught. Editor Steven W. Hackel evokes three contemporary moments that frame this collected volume: the 2013 tercentennial of Juni ´pero Serra’s birth, which inspired this project; Serra’s contentious canonization in 2015; and the anti-Latinx and Trumpian fervor that grips political and historical discourse in the United States today."—Hispanic American Historical Review

"The essays in this volume each contribute to an appreciation of Serra, particularly in his own time and on his own terms."—Catholic Southwest: A Journal of History and Culture

"This impressive collection of essays brings to life, in vivid color and detail, the many worlds crucial to both producing and understanding Serra, spanning the places of Mallorca, Mexico, and California and the influences of education, intellectual and spiritual life, art, popular culture, and historical commemoration."—Juliana Barr, author of Peace Came in the Form of a Woman: Indians and Spaniards in the Texas Borderlands


"Is there anyone in California’s history who still evokes such passionate disagreement as Junípero Serra? In this sparking collection, Serra’s great biographer Steven Hackel has brought together an international dream team of scholars from multiple disciplines to help us get beyond caricatures of good and evil and see the man in his full context. A subtle, surprising, and deeply satisfying book."—Brian DeLay, author of War of a Thousand Deserts: Indian Raids and the U.S.-Mexican War

"Junípero Serra traveled widely through the Spanish world of the eighteenth century. From his training in Mallorca, his transit through Puerto Rico, his experiences in many different parts of Mexico, and his work in California, Serra’s rich life constitutes an ideal vehicle to explore a vast empire in constant motion at a time of profound transformation. These essays by notable scholars and true specialists add greatly to our understanding of the man and his times and shine a light on the subtle and not-so-subtle ways in which the Old World and the New World were bound together by a common history."—Andrés Reséndez, author of The Other Slavery: The Uncovered Story of Indian Enslavement in America

PART ONE. MALLORCA: FROM STUDENT TO PROFESSOR

Inside the Cloister: Exploring the Life of Fray Junípero Serra in the College of San Fernando
David Rex Galindo

Serra among the Faithful: The Popular Mission
Karen Melvin

PART THREE. ART AND ARCHITECTURE: THE AESCTHETIC EYE OF SERRA

The Invention of Junípero Serra and the “Spanish Craze”
Richard L. Kagan