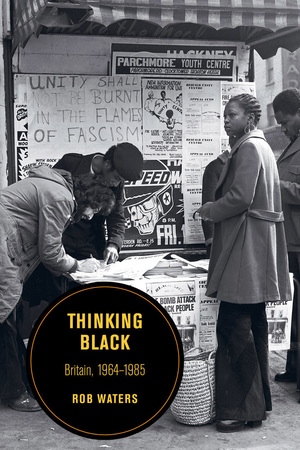 It was a common charge among black radicals in the 1960s that Britons needed to start “thinking black.” As state and society consolidated around a revived politics of whiteness, “thinking black,” they felt, was necessary for all who sought to build a liberated future out of Britain’s imperial past.

In Thinking Black, Rob Waters reveals black radical Britain’s wide cultural-political formation, tracing it across new institutions of black civil society and connecting it to decolonization and black liberation across the Atlantic world. He shows how, from the mid-1960s to the mid-1980s, black radicalism defined what it meant to be black and what it meant to be radical in Britain.

Rob Waters is Lecturer in Modern British History at the University of Birmingham.

"Will become a foundational text."—Journal of Contemporary History

"Thinking Black is the new reference text on Britain’s extended Black Power moment, but its insights extend well beyond. It places young black Britons and politicized blackness at the forefront of the political battles and social, cultural, and intellectual shifts that defined the 1960s and 1970s. The book makes a substantial contribution to postwar, post-imperial British history and to our appreciation of the interconnected political cultures of the black Atlantic."—Marc Matera, author of Black London: The Imperial Metropolis and Decolonization in the Twentieth Century

"Thinking Black positions blackness and the conditions shaping the lives of those who embodied, imagined, and mobilized blackness in many forms at the center of analysis. From this vantage point, the book offers a view of contemporary British history and transnational race politics that has largely been ignored by historians."—Kennetta Hammond Perry, author of London Is the Place for Me: Black Britons, Citizenship and the Politics of Race

"Anyone committed to decolonising contemporary British politics and society must read Rob Waters’ book. Beautifully written and powerfully argued, Waters tells the story of when ‘thinking black’ in Britain promised the birth of a new, postcolonial society. This is a history buzzing with life, with intellectual ferment, with well-known and lesser-known black activists and intellectuals transforming the very terrain of British politics and culture. The book sheds important new light on the global history of postcolonial thought and activism. And, by rightly situating black radicalism at the center of public debate in Britain in the 1970s, Waters reveals that its history is truly essential to our understanding of wider transformations in British society at this time." —Camilla Schofield, author of Enoch Powell and the Making of Postcolonial Britain

List of Illustrations
Acknowledgments
Acronyms and Initialisms of Black Britain