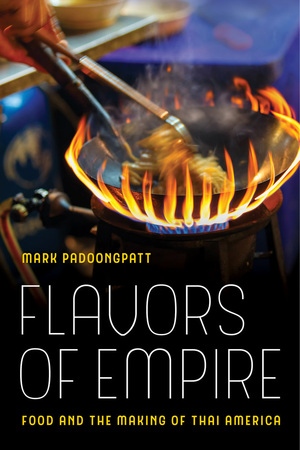 Flavors of Empire Food and the Making of Thai America

With a uniquely balanced combination of salty, sweet, sour, and spicy flavors, Thai food burst onto Los Angeles’s and America’s culinary scene in the 1980s. Flavors of Empire examines the rise of Thai food and the way it shaped the racial and ethnic contours of Thai American identity and community. Full of vivid oral histories and new archival material, this book explores the factors that made foodways central to the Thai American experience. Starting with American Cold War intervention in Thailand, Mark Padoongpatt traces how informal empire allowed U.S. citizens to discover Thai cuisine abroad and introduce it inside the United States. When Thais arrived in Los Angeles, they reinvented and repackaged Thai food in various ways to meet the rising popularity of the cuisine in urban and suburban spaces. Padoongpatt opens up the history and politics of Thai food for the first time, all while demonstrating how race emerges in seemingly mundane and unexpected places.

By Mark Padoongpatt, author of the forthcoming Flavors of Empire: Food and the Making of Thai America As we celebrate Asian Pacific Islander American Heritage Month this year, we do so right …

Mark Padoongpatt is Assistant Professor of Asian and Asian American Studies at the University of Nevada, Las Vegas.

"An important contribution that not only illuminates the formation of the Thai American community but also offers a novel approach that takes foodways as a critical entry point to explore the entanglements of American empire, Thai migration and racialization."—Gastronomica

"I highly recommend this book; it is a feast of great flavours."—Pacific Affairs

"Padoongpatt provides a much-needed narrative on Thai Americans in Los Angeles by focusing on Thai food and its connection to globalism, policy, immigration, race, notions of empire, and making place in Los Angeles."—Journal of Asian American Studies

"This is not your typical book on Thai culture and cuisine, in fact, there has never been a book like this! Padoongpatt is a pioneer that's finally telling the definitive story of the history of Thai people in America. You will learn how Thai food brought us together."—Jet Tila, celebrity chef, restaurateur, and author of 101 Asian Dishes You Need to Cook Before You Die: Discover a New World of Flavors in Authentic Recipes


"Flavors of Empire makes significant, original, and generative contributions to civic life by revealing the degree to which the U.S. racial order has been shaped by the direct and collateral consequences of U.S. warfare in Asia; by the utility of race, ethnicity, and nation in producing novelty; and by the role of racialized spatial imaginaries about public and private space in global cities."—George Lipsitz, author of How Racism Takes Place
Read More >

Introduction: From Thailand to Thai Town
1 • “One Night in Bangkok”: Food and the Everyday Life of Empire
2 • “Chasing the Yum”: Food Procurement and Early Thai Los Angeles
3 • Too Hot to Handle? Restaurants and Thai American Identity
4 • “More Than a Place of Worship”: Food Festivals and Thai American Suburban Culture
5 • Thailand’s “77th Province”: Culinary Tourism in Thai Town
Conclusion: Beyond Cooking and Eating