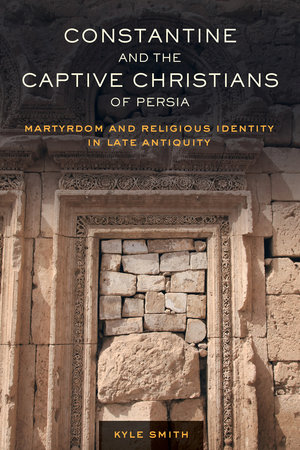 It is widely believed that the Emperor Constantine’s conversion to Christianity politicized religious allegiances, dividing the Christian Roman Empire from the Zoroastrian Sasanian Empire and leading to the persecution of Christians in Persia. This account, however, is based on Greek ecclesiastical histories and Syriac martyrdom narratives that date to centuries after the fact. In this groundbreaking study, Kyle Smith analyzes diverse Greek, Latin, and Syriac sources to show that there was not a single history of fourth-century Mesopotamia. By examining the conflicting hagiographical and historical evidence, Constantine and the Captive Christians of Persia presents an evocative and evolving portrait of the first Christian emperor, uncovering how Syriac Christians manipulated the image of their western Christian counterparts to fashion their own political and religious identities during this century of radical change.

Kyle Smith is Assistant Professor of Historical Studies and Religion at the University of Toronto and the translator of The Martyrdom and History of Blessed Simeon bar Sabba'e.

"By examining Constantine through the lens of the Sasanian world...[Kyle Smith] manages to break free of Eusebius and his domineering narrative. This will pay dividends for our understanding of this major figure in world history, as well as the history of Christianity in Late Antiquity more broadly. That Smith’s book is so clearly written, well organized, and tightly argued further ensures its impact on the field."—Pleket

"A welcome contribution to an important field of study."—Plekos

"Kyle Smith has written a provocative, engaging, and elegant book. . . .[in which] Smith critiques previous historiography and demonstrates new possibilities and avenues for constructing the history of Persian Christians in the fourth century and their relationship to Constantine and the Roman Empire."—Studies in Late Antiquity

“This is an excellent book. Wholly innovative, it dismantles much of the stage and script upon which the fourth-century history of the Roman-Sasanian frontier were thought to have been acted out. More significantly, Kyle Smith’s deft readings lead ultimately to a new vision of the fifth and sixth centuries, when the paradigms that affected modern scholars’ understanding of the fourth century emerged.”—Adam H. Becker, Associate Professor of Classics and Religious Studies at New York University


"Constantine the Great's patronizing letter to his Persian counterpart, Shapur II, has long been cited as the cause of wars that led to Rome's loss of key territories in Mesopotamia. By tracking the after-life of this letter through rarely studied Syriac sources, Kyle Smith has convincingly reconfigured this story. It will be hard now for anyone to call this letter a casus belli with a straight face."—H. A. Drake, Research Professor of History at the University of California, Santa Barbara
Read More >

Introduction: Constantine and the Writing of Fourth-Century History

PART I: THE ROMAN FRONTIER AND THE PERSIAN WAR

4 • On War and Persecution: Aphrahat the Persian Sage and the Martyrdom and History of Blessed Simeon bar Sabba?e
5 • The Church of the East and the Territorialization of Christianity
6 • Memories of Constantine in the Acts of the Persian Martyrs

Appendix A. Constantine’s Letter to Shapur: Eusebius’s Life of Constantine IV.8–14
Appendix B. Martyrdom of the Captives of Beth Zabdai
Appendix C. Martyrdom of Abbot Barshebya, Ten Fellow Brothers, and One Magus