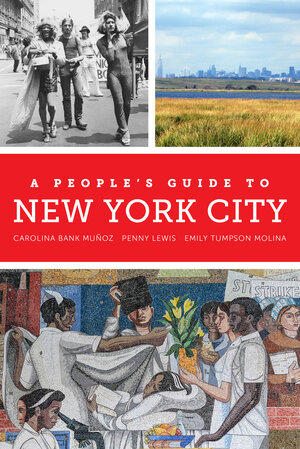 This alternative guidebook for one of the world’s most popular tourist destinations explores all five boroughs to reveal a people’s New York City.

The sites and stories of A People’s Guide to New York City shift our perception of what defines New York, placing the passion, determination, defeats, and victories of its people at the core. Delving into the histories of New York's five boroughs, you will encounter enslaved Africans in revolt, women marching for equality, workers on strike, musicians and performers claiming streets for their art, and neighbors organizing against landfills and industrial toxins and in support of affordable housing and public schools. The streetscapes that emerge from these groups' struggles bear the traces, and this book shows you where to look to find them.

New York City is a preeminent global city, serving as the headquarters for hundreds of multinational firms and a world-renowned cultural hub for fashion, art, and music. It is among the most multicultural cities in the world and also one of the most segregated cities in the United States. The people that make this global city function—immigrants, people of color, and the working classes—reside largely in the so-called “outer boroughs,” outside the corporations, neon, and skyscrapers of Manhattan. A People’s Guide to New York City expands the scope and scale of traditional guidebooks, providing an equitable exploration of the lives of the diverse communities across the city. Through the stories of over 150 sites across the Bronx, Manhattan, Queens, Brooklyn and Staten Island as well as thematic tours and contemporary and archival photographs, a people’s New York emerges, one in which collective struggles for justice and freedom have shaped the very landscape of the city.

Carolina Bank Muñoz is Professor of Sociology at Brooklyn College and the CUNY Graduate Center.

Penny Lewis is Associate Professor of Labor Studies at the CUNY School of Labor and Urban Studies.

Emily Tumpson Molina is Associate Professor of Sociology and Director of the Center for the Study of Brooklyn at Brooklyn College, City University of New York.