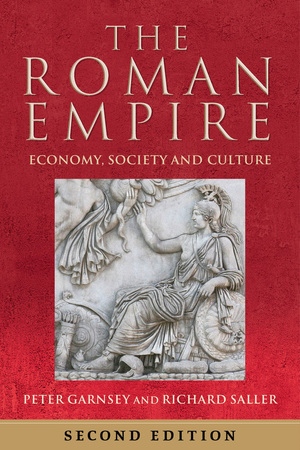 During the Principate (roughly 27 BCE to 235 CE), when the empire reached its maximum extent, Roman society and culture were radically transformed. But how was the vast territory of the empire controlled? Did the demands of central government stimulate economic growth or endanger survival? What forces of cohesion operated to balance the social and economic inequalities and high mortality rates? How did the official religion react in the face of the diffusion of alien cults and the emergence of Christianity?

These are some of the many questions posed here, in the new, expanded edition of Garnsey and Saller's pathbreaking account of the economy, society, and culture of the Roman Empire. This second edition includes a new introduction that explores the consequences for government and the governing classes of the replacement of the Republic by the rule of emperors. Addenda to the original chapters offer up-to-date discussions of issues and point to new evidence and approaches that have enlivened the study of Roman history in recent decades. A completely new chapter assesses how far Rome’s subjects resisted her hegemony. The bibliography has also been thoroughly updated, and a new color plate section has been added.

Peter Garnsey is Emeritus Professor of the History of Classical Antiquity and a Fellow of Jesus College, University of Cambridge. His publications include Social Status and Legal Privilege in the Roman Empire; Famine and Food Supply in the Graeco-Roman World; Ideas of Slavery from Aristotle to Augustine; Cities, Peasants and Food; Food and Society in Classical Antiquity; and Thinking about Property: From Antiquity to the Age of Revolution.

Richard Saller is Dean of the School of Humanities and Sciences at Stanford University. He is the author of Personal Patronage under the Early Empire and Patriarchy, Property, and Death in the Roman Family, and he is coeditor of The Cambridge Economic History of Greco-Roman Antiquity.

“Brilliantly conceived by two of the greatest living authorities on ancient Rome and an instant classic when it first appeared, this magisterial work has been generously expanded and updated to incorporate the latest scholarship. We could not wish for a more penetrating analysis of the foundations of Roman civilization.” —Walter Scheidel, Dickason Professor in the Humanities, Stanford University

“Garnsey and Saller's The Roman Empire is unsurpassed as a clear and thought-provoking introduction to key themes and issues in the economic, social, and cultural history of Rome. This new edition, expanding the book's scope and offering a guide to the most important recent research, ensures that it will remain essential reading for students for years to come.” —Neville Morley, Professor of Ancient History, University of Bristol

“A now-classic introduction to the Roman Empire, which was always much more than a mere introduction and whose contents have withstood the test of time, is now made available in an even better edition, with new contributions on resistance, religion, and culture by Martin Goodman, Richard Gordon, Jas Elsner, and Greg Woolf. The bibliographical addenda are mines of information: sure guides to the best of recent scholarship on every aspect of the empire covered by the authors. This new edition of The Roman Empire is highly recommended as simply the best entrée to the big aspects and the big problems of the Roman Empire at the height of its power.” —Brent D. Shaw, Andrew Fleming West Professor of Classics, Princeton University


“Freshly revised for the twenty-first century, Garnsey and Saller’s masterful survey remains the indispensable introduction to society and the economy under the emperors. Scholars as well as students will mine its updated bibliography for authoritative guidance to recent research, while the new chapter and addenda enhance the book’s value for the classroom.” —Nathan Rosenstein, Professor of History, The Ohio State University

“Packed with information and ideas, yet concise and readable, this is by far the best available guide for students and general readers to how the Roman Empire actually worked, and its enduring impact on the history of the Mediterranean world. Groundbreaking in its thematic approach when first published in 1987, it now benefits from an introductory survey of the empire's political system, and supplements to each chapter that provide a bird's-eye view of the questions raised and debated in a generation of new research.” —Dominic Rathbone, Professor of Ancient History, King's College London
Read More >

PART ONE
1. Introducing the Principate
2. A Mediterranean Empire
Addendum
3. Government Without Bureaucracy
Addendum
4. Enemies of Rome by M. Goodman
Addendum by M. Goodman