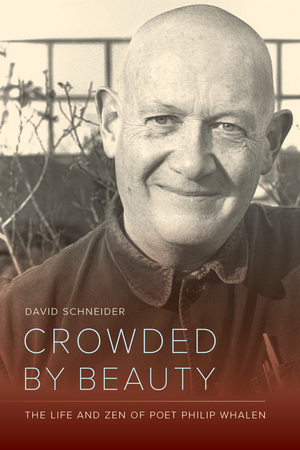 Crowded by Beauty The Life and Zen of Poet Philip Whalen

Philip Whalen was an American poet, Zen Buddhist, and key figure in the literary and artistic scene that unfolded in San Francisco in the 1950s and ’60s. When the Beat writers came West, Whalen became a revered, much-loved member of the group. Erudite, shy, and profoundly spiritual, his presence not only moved his immediate circle of Beat cohorts, but his powerful, startling, innovative work would come to impact American poetry to the present day.

Drawing on Whalen’s journals and personal correspondence—particularly with Ginsberg, Kerouac, Snyder, Kyger, Welch, and McClure —David Schneider shows how deeply bonded these intimates were, supporting one another in their art and their spiritual paths. Schneider, himself an ordained priest, provides an insider’s view of Whalen’s struggles and breakthroughs in his thirty years as a Zen monk. When Whalen died in 2002 as the retired Abbot of the Hartford Street Zen Center, his own teacher referred to him as a patriarch of the Western lineage of Buddhism. Crowded by Beauty chronicles the course of Whalen’s life, focusing on his unique, eccentric, humorous, and literary-religious practice.

David Schneider is the author of Street Zen: The Life and Work of Issan Dorsey. He was ordained as a Zen priest in 1977 and was made an acharya of the Shambhala lineage in 1995.

"With this book, Schneider has opened the window on a man who was not originally one of the 'famous Beats' but who may find a posthumous place in the new generation’s pantheon."—Shambhala Times

"An unconventional man deserves an unconventional biography . . . . A major figure in both American poetry and the growth of Zen Buddhist practice in America, Whalen was brilliant, erudite, humorous, earthy yet chaste, improvident, as lovable to those who knew him as he probably will be, thanks to Schneider, to those who read about him." - STARRED—Booklist

"If Whalen was a poet’s poet, then Schneider’s book is a biographer’s biography. . . . Schneider, who was ordained as a Zen priest in 1977, writes with verve and precision, and draws creatively on Whalen’s unpublished journals and voluminous correspondence. Quotations are woven into the text and make for lively reading."—San Francisco Chronicle

"The whole book is a must-read."—The Allen Ginsberg Project

"Not only one of the most keenly observed books on the Beats ever published, but it’s also a fascinating exploration of the life and dharma of one of the first American-born Zen teachers."—Steve Silberman Buddhadharma

"One garners from this well written and sensitive biography of a key American author a sense of the energy and openness of the whole Beat and San Francisco Poetry Renaissance of the 1950s to 1970s."—Larry Smith New York Journal of Books

"Crowded by Beauty serves as a reminder that among all the celebrity and cachet of rebelliously prescient intellects, the one most radical in his approach to American poetry has been overlooked."—Pat Nolan The New Black Bart Poetry Society

“More than a biography or a memoir ... a CELEBRATION of Zen Being.”—Michael McClure, author of Of Indigo and Saffron: New and Selected Poems

"Philip Whalen’s poetry is complex, generous, and utterly amusing, as he was. David Schneider’s biography uses Phil’s own circular sense of time to fascinate us with this life of a poet and Buddhist; part beatnik, part 19th-century throwback, part profound animal—-part roshi, still calling us to order and to rejoice."—Alice Notley, author of Negativity’s Kiss

"Fellowship and remarkable clarity bring enlightened and generous understanding to this rendering of the life and times of singular poet and teacher Philip Whalen. His longtime friend in the Dharma, teacher and writer David Schneider transmits the delight and wisdom of this poet's bountiful spirit."—Joanne Kyger, author of Again: Poems 1989–2000

"Crowded by Beauty is an exceedingly vivid and nuanced portrait of the inimitable Philip Whalen, a secret hero to many of us coming after. Schneider captures Whalen’s life, work, and the Dharma ‘path,’ carving out a time capsule of, as yet, unexplored countercultural practice and ethos.”—Anne Waldman, The Jack Kerouac School of Disembodied Poetics, Naropa University

“‘Our real life is in other persons,’ Philip Whalen once said. His larger than life-sized poems, Zen teachings, journals, and letters all live on in this moving and big-hearted biography-by-friendships—made up equally of scholarship, personal knowledge, gossipy quotes, foodstuffs, desires, realized interconnection, and quicksilver perception.”—Jane Hirshfield, author of Ten Windows: How Great Poems Transform the World

“‘Lively’ was one of Philip Whalen’s favorite words, and that’s what David Schneider’s biography of Whalen is....Highly original, personable, and authoritative, Crowded by Beauty will take its place among the very best books on both the Beat Generation and American Zen.”—John Suiter, author of Poets on the Peaks: Gary Snyder, Philip Whalen & Jack Kerouac in the North Cascades