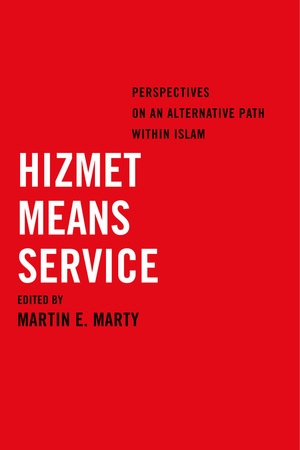 Hizmet Means Service Perspectives on an Alternative Path within Islam

Hizmet Means Service examines Hizmet, a Turkey-based but global movement dedicated to human service. Inspired by Fethullah Gülen, a Sufi Muslim mystic, scholar, and preacher, it is an international endeavor focused on education, business, interfaith dialogue, science, and efforts to promote tolerance and understanding. One of Hizmet’s main tenets is that religious believers can hold profound beliefs and commit spiritually inspired acts of service without discriminating against or alienating people of other faiths. Even as a ruling party in Turkey has set out to undercut the movement, its international influence continues to grow and attract followers who are devoted to service.

The scholars whose work appears in this book represent a variety of disciplines, faiths, and nations and offer a wide range of narratives, analyses, and critiques. This title moves beyond mere introduction, analyzing Hizmet and the manifestations of this interfaith movement.

Don’t Make A Mystic into a Martyr: Fethullah Gülen as Peacebuilder

This guest post is by Jon Pahl, Ph.D, the Peter Paul and Elizabeth Hagan Professor in the History of Christianity at The Lutheran Theological Seminary at Philadelphia I can’t speak to the …

Martin E. Marty is the Fairfax M. Cone Distinguished Service Professor Emeritus in the University of Chicago Divinity School. He is the author of over fifty books, including most recently Dietrich Bonhoeffer's Letters and Papers from Prison: A Biography.

"Given the current uncertainty in the Middle East, the book provides much needed perspectives on the relatively unknown, peaceable but not quietist, radical but not radicalized, and ecumenically-minded renewal movement among Muslims that nuances both the Orientalist and terrorist narratives so common in the Western media... [illuminates] an important new reli- gious movement in Turkish society."—Nova Religio

"Marty brings together some of the most prominent scholars in Islamic and Turkish studies, whose essays in this volume present a comprehensive and coherent study of the Gülen movement and its Hizmet (service) organizations. The volume is a significant contribution to understanding the nature of global religious movements in the twenty-first century and will be of major interest to scholars of social movements as well as people interested in contemporary cosmopolitan religion."—John O. Voll, Georgetown University


“These essays usefully distill the complex issues surrounding what is arguably the most compelling and at the same time puzzling exemplar of contemporary Islam's engagement with twenty-first century society. The contributors live up to their role in elucidation and analysis: Marty's introduction and R. Scott Appleby's lucid summation set the terms and syntax for an important conversation that must be ongoing.”—Richard A. Rosengarten, University of Chicago Divinity School


“A timely and important contribution to the literature on Islamic studies. Analyzing the Gülen movement in Turkey and globally, it covers a broad range of issues such as Muslim ethics, education, interfaith dialogue, and politics."—Ahmet T. Kuru, author of Secularism and State Policies toward Religion: The United States, France, and Turkey
Read More >

Acknowledgments  Introduction (Martin E. Marty) 1 • Hizmet among the Most Influential Religious Movements of Late Ottoman and Modern Turkish History (Carter Vaughn Findley)2 • Who Is Fethullah Gulen? An Overview of His Life (Marcia Hermansen)3 • The Institutions and Discourses of Hizmet Culture, and Their Discontents (Jeremy F. Walton)4 • The Role of Religion in the Gülen Movement (Zeki Saritoprak)5 • Building Bridges: Gülen Pontifex (Simon Robinson)6 • Ethics in the Theory and Practice of Hizmet (Radhi H. al-Mabuk)7 • Gulen as an Educator (Tom Gage)