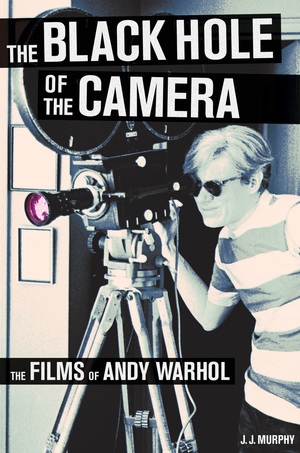 The Black Hole of the Camera The Films of Andy Warhol

Andy Warhol, one of the twentieth century’s major visual artists, was a prolific filmmaker who made hundreds of films, many of them—Sleep, Empire, Blow Job, The Chelsea Girls, and Blue Movie—seminal but misunderstood contributions to the history of American cinema. In the first comprehensive study of Warhol’s films, J.J. Murphy provides a detailed survey and analysis. He discusses Warhol’s early films, sound portraits, involvement with multimedia (including The Velvet Underground), and sexploitation films, as well as the more commercial works he produced for Paul Morrissey in the late 1960s and early 1970s. Murphy’s close readings of the films illuminate Warhol’s brilliant collaborations with writers, performers, other artists, and filmmakers. The book further demonstrates how Warhol’s use of the camera transformed the events being filmed and how his own unique brand of psychodrama created dramatic tension within the works.

J.J. Murphy is Professor of Film and Affiliate Professor of Art at the University of Wisconsin-Madison. A filmmaker and curator, Murphy is also the author of Me and You and Memento and Fargo: How Independent Screenplays Work.

“Challenge[s] the entire field to discover the pleasures and rewards of respecting the specificity and integrity of Warhol’s production.”—Artforum

“Until now no one has offered a definitive study of the numerous sound films Warhol made between 1964 and 1968, an astonishingly prolific period in the artist’s career. Murphy’s study is critical to any understanding of Warhol’s impact and influence as a filmmaker. The author’s meticulous attention to specifics, supported by numerous illustrations, is all the more important because the films themselves are preserve only in museums in 16mm film format and so are generally unavailable to viewers. Detailed descriptions couple with solid knowledge of the era to make the films com alive. This is one of the best books on Warhol’s films to date.”—Choice

“A thoroughly engaging and exciting read, thoroughly jam-packed with revelatory details and descriptions. Murphy, who was inspired in his own filmmaking career by watching Warhol’s films, shares his unbridled enthusiasm in the best ways that a true scholar and a devoted fan can. Like the ways Warhol’s films inspired Murphy, his book should serve as an inspiration to both future generations of filmmakers and to other scholars to reevaluate the contribution that Warhol made to the independent and underground film scene of the 1960s.”—Bad Lit

“If his title - The Black Hole of the Camera - suggests the still-prevalent characterization of the filmmaker as a disaffected voyeur, Murphy's engaging study gives us Warhol the visionary instead.”—Times Higher Education

“An engaging, invaluable volume that does much to reframe Warhol’s complex use of [film]. . . . A terrific resource in this burgeoning field.”—Fandor.com

“Fascinating and essential. . . . A product of thoroughly engaged research. . . . [This book] re-invigorates the idea of Warhol as one of the central filmmakers of the American avant-garde and underground.”—Jack Sargeant Filmink Magazine

“One acclaimed filmmaker takes the measure of another! Murphy’s candid and richly personal account of Andy Warhol’s filmmaking is a brilliant contribution to our understanding of one of cinema’s most original and prolific masters, exploring the artist's multiple forms of psychodrama with a filmmaker’s insight and attention to detail. As more and more of the restored Warhol films become available, this book will remain an indispensable handbook for film historians and general moviegoers alike—especially because it is such a genuine pleasure to read."—David E. James, author of The Most Typical Avant-Garde: History and Geography of Minor Cinemas in Los Angeles.

“Those of us who care about independent cinema have always struggled with Andy Warhol’s massive oeuvre. At long last J.J. Murphy, who has spent a lifetime making contributions to independent cinema, has undertaken the Herculean task of helping us understand Warhol’s development as a filmmaker. Murphy’s precision, stamina, and passion are evident in this examination of an immense body of work—as is his ability to report what he has discovered in a readable and informative manner. The Black Hole of the Camera helps us to re-conceptualize Warhol’s films not simply as mythic pranks, but as the diverse creations of a prolific and inventive film artist.”—Scott MacDonald, author of A Critical Cinema: Interviews with Independent Filmmakers (5 vols.).

"In his careful firsthand study of Andy Warhol’s films, J. J. Murphy contributes to the ongoing revision of the enduring but misplaced perceptions of Warhol as a passive, remote, and one-dimensional artist. Murphy's discussions of authorship, the relation of content to form, the role of "dramatic conflict,” and the complexity of Warhol’s camera work show these perceptions to be stubborn myths. The Black Hole of the Camera offers a clear sense of the nuances of Warhol’s fascinating, prolific, and influential activities in filmmaking."—Reva Wolf, author of Andy Warhol, Poetry, and Gossip in the 1960s.

Introduction: Try Not to Blink
1. The Early Films of Andy Warhol: Obeying the Machine
2. Scenarios by Ronald Tavel: We Have Your Number
3. Films Made with Chuck Wein: Mind Games
4. The Sound Portraits: Doing Ourselves
5. Expanded Cinema: Come Blow Your Mind
6. The Sexploitation Films: Enticing the Raincoat Crowd
7. Paul Morrissey Films: Confidential Stories
Conclusion: The Factory of the Future