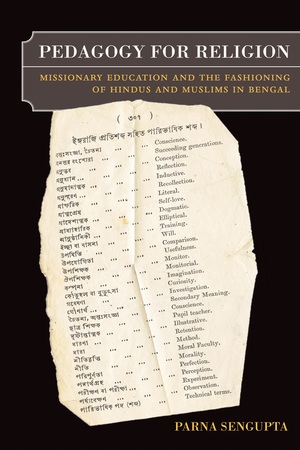 Offering a new approach to the study of religion and empire, this innovative book challenges a widespread myth of modernity—that Western rule has had a secularizing effect on the non-West—by looking closely at missionary schools in Bengal. Parna Sengupta examines the period from 1850 to the 1930s and finds that modern education effectively reinforced the place of religion in colonial India. Debates over the mundane aspects of schooling, rather than debates between religious leaders, transformed the everyday definitions of what it meant to be a Christian, Hindu, or Muslim. Speaking to our own time, Sengupta concludes that today’s Qur’an schools are not, as has been argued, throwbacks to a premodern era. She argues instead that Qur’an schools share a pedagogical frame with today’s Christian and Muslim schools, a connection that plays out the long history of this colonial encounter.

“By bringing together the conventionally disparate histories of missionary pedagogy and those of socio-religious reformers in colonial India, Parna Sengupta radically transforms both. Not least of her contributions is her demonstration of the emergence of the fundamental modern category of ‘religion’ as a discrete domain of teaching and experience. Based on extensive research in colonial and vernacular sources, this original and insightful study succeeds in probing new dimensions of nationalism and multiculturalism in India.” —Barbara D. Metcalf, Professor of History Emerita, UC Davis

“Sengupta's history shows us that religion was a carrier of modernity in British India and that religious pedagogy in an imperial context enabled modern vernaculars of all kinds to flourish. Drawing on Bengali Hindu and Muslim appropriations of evangelical intention, she illustrates not one-way traffic but patterns of reciprocal influence that arguably shaped the end of empire as well as the lineaments of modern nationalism. For those who think that mission history cannot exceed the categories of the colonial state it often served, Pedagogy for Religion is a revelation to be reckoned with.” —Antoinette Burton, author of Empire in Question: Reading, Writing and Teaching British Imperialism

“In this path-breaking study, Parna Sengupta challenges our usual assumptions about the relationship between western education and secularism in India. Drawing on meticulous research, Sengupta shows how educational reform, whether in the hands of missionaries or local Hindu groups, provided the impetus for the creation of new religious strategies and identities in colonial Bengal. Macaulay will never be read in the same way again.”


—Nicholas B. Dirks, author of The Scandal of Empire: India and the Creation of Imperial Britain
Read More >