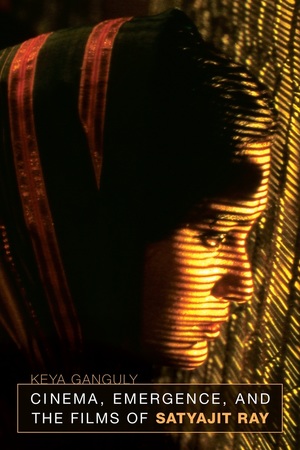 Cinema, Emergence, and the Films of Satyajit Ray

Although revered as one of the world’s great filmmakers, the Indian director Satyajit Ray is described either in narrowly nationalistic terms or as an artist whose critique of modernity is largely derived from European ideas. Rarely is he seen as an influential modernist in his own right whose contributions to world cinema remain unsurpassed. In this benchmark study, Keya Ganguly situates Ray’s work within the internationalist spirit of the twentieth century, arguing that his film experiments revive the category of political or “committed” art. She suggests that in their depictions of Indian life, Ray’s films intimate the sense of a radical future and document the capacity of the image to conceptualize a different world glimpsed in the remnants of a disappearing past.

Keya Ganguly is Professor of Cultural Studies and Comparative Literature at the University of Minnesota and author of States of Exception: Everyday Life and Postcolonial Identity.

“far superior to similar studies undertaken both in India and in the West. [Ganguly] delves deep into the circumstances in which Ray's films came to be made, their situational and social ethos, the master's technique, and how they all drew from the rich cultural tapestry of the land. . . .A well-researched piece of writing that commands a keen eye and a perceptive understanding of cinema as a tool of nuanced expression.”—The Hindu

“This is a deeply researched, theoretically sophisticated and organic study. Keya Ganguly's intellectual tour de force in this analysis of the great Indian film maker Satyajit Ray will provide a benchmark for future studies of the subject.”—Partha Mitter, author of The Triumph of Modernism: Indian Artists and the Avant-Garde 1922-1947

"What distinguishes Ganguly’s book from the more fashionable approaches to non-Western cinema is her willingness to assert the importance of European theory—specifically, writings on film by Eisenstein, Benjamin, Kracauer, Balázs, among others—as a way to elaborate Satyajit Ray’s contributions in the larger postwar context of an international New Wave cinema movement. She does this with extraordinary intelligence and finesse, and the result is an illuminating statement on how a cinema that seems nostalgic for a disappearing cultural past can in fact be read, for the first time perhaps, for its intimations of an as-yet unrealized futurity."—Rey Chow, author of Sentimental Fabulations, Contemporary Chinese Films

Introduction: The Light of the New Moon