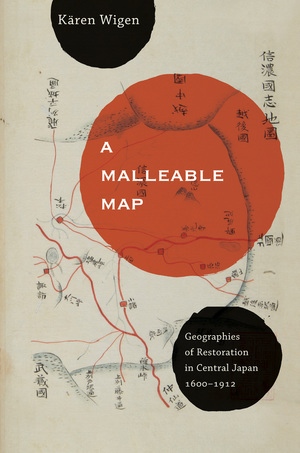 A Malleable Map Geographies of Restoration in Central Japan, 1600-1912

Kären Wigen probes regional cartography, choerography, and statecraft to redefine restoration (ishin) in modern Japanese history. As developed here, that term designates not the quick coup d’état of 1868 but a three-centuries-long project of rehabilitating an ancient map for modern purposes. Drawing on a wide range of geographical documents from Shinano (present-day Nagano Prefecture), Wigen argues that both the founder of the Tokugawa Shogunate (1600–1868) and the reformers of the Meiji era (1868–1912) recruited the classical map to serve the cause of administrative reform. Nor were they alone; provincial men of letters played an equally critical role in bringing imperial geography back to life in the countryside. To substantiate these claims, Wigen traces the continuing career of the classical court’s most important unit of governance—the province—in central Honshu.

Kären Wigen is Professor of History at Stanford University. She is the author of The Making of a Japanese Periphery and co-author of The Myth of Continents: A Critique of Metageography, both from UC Press.

"In this highly original work, author Kären Wigen takes the reader on an exciting journey across the elaborate history and colorful techniques of Japanese cartography. Through a series of wonderful stories, we learn of the progression of fudoki and kuniezu, early mapping to gazetteers, modern techniques of mapping, statistical yearbooks, and newspapers. The author has a talent for masterfully stating her inferences and conclusions, while also leaving the reader much room and motivation to think forward. This is truly a fascinating work. And of course, the maps are gorgeous."—Helen Hardacre, Harvard University

"A Malleable Map masterfully interleaves debates within Japanese history with issues of interest beyond the national field. In addition to its important contributions to rethinking the role and meanings of provincial spaces in the creation of a modern Japanese state, it speaks to broad theoretical and historical ideas of the role of maps, of conceptual geography, of the local and the national, and, strikingly, of the past, of history itself, in the formation of modern nations. Wigen works deftly between metaphorical and actual forms of mapping, building a conceptual bridge between the early chapters on actual maps with the later chapters on the dissemination of geographic ideology through textual sources. Further, her insightful discussion of the importance of various kinds of scaling in historical analysis is a beautiful model of the productive synthesis of theory and practice. The book negotiates the complex layering of competing local, national, and international forces to create a dynamic picture of the meaning of space to residents and rulers over a span of centuries. A Malleable Map is a major accomplishment and a delight to read."—Valerie A. Kivelson, author of Cartographies of Tsardom: The Land and Its Meaning in Seventeenth-Century Russia


"A Malleable Map is a striking example of what a historically deep, learned, and meticulous examination of maps and geographical place-making can teach us. Wigen's compelling analysis and stunning graphics sets a new standard for understanding the production of spatial identity."—James C. Scott, Yale University
Read More >

Contents
List of Illustrations
Conventions Followed in the Text
Acknowledgments

Part One. A Province Defined

4. The Poetry of Statistics
5. Pedagogies of Place
6. A Pan-Provincial Press 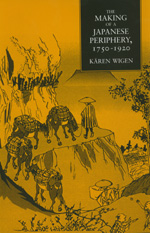