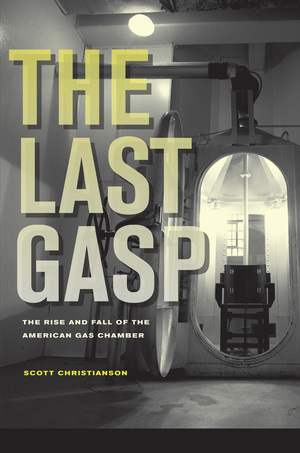 The Last Gasp takes us to the dark side of human history in the first full chronicle of the gas chamber in the United States. In page-turning detail, award-winning writer Scott Christianson tells a dreadful story that is full of surprising and provocative new findings. First constructed in Nevada in 1924, the gas chamber, a method of killing sealed off and removed from the sight and hearing of witnesses, was originally touted as a “humane” method of execution. Delving into science, war, industry, medicine, law, and politics, Christianson overturns this mythology for good. He exposes the sinister links between corporations looking for profit, the military, and the first uses of the gas chamber after World War I. He explores little-known connections between the gas chamber and the eugenics movement. Perhaps most controversially, he has unearthed new evidence about American and German collaboration in the production and lethal use of hydrogen cyanide and about Hitler’s adoption of gas chamber technology developed in the United States. More than a book about the death penalty, this compelling history ultimately reveals much about America’s values and power structures in the twentieth century.

Scott Christianson is a writer, investigative reporter, and historian. He is the author of several acclaimed books, including With Liberty for Some: 500 Years of Imprisonment in America, winner of the Robert F. Kennedy Book Award Distinguished Honors and a Choice Outstanding Book Award. His book Condemned: Inside the Sing Sing Death House was the subject of feature stories in the Village Voice, the New York Times, The Nation, and on the History Channel.

“Christianson charts the 75-year history of gas chamber execution as well as its intersection with eugenics, the Holocaust, and America’s ongoing capital punishment debate. . . . Despite being developed as a swifter and more painless alternative to death than hanging or electrocution, Christianson describes in graphic detail the numerous botched executions during which death took over 10 agonizing minutes. Though the gas chamber hasn’t been used in America since 1999, Christianson makes a chilling argument for its—and the death penalty’s—abolition.”—Publishers Weekly

“Christianson has written the definitive (actually, the only) history of the gas chamber. It is a history so complicated and convoluted that it reads almost like something out of Thomas Pynchon's Gravity's Rainbow.”—California Lawyer

“Christianson uses government documents, newspapers, and secondary sources to present this tale and includes a list of people executed by gas in this country from 1924 to 1999. . . . This sobering work is recommended to all readers interested in exploring the topic.”—Library Journal

“The book fills a lacuna of knowledge with a compelling narrative that will be of broad interest not only to historians, sociologists, and legal scholars but also to a nonscholarly audience.”—Journal of American History

“Christianson’s skills as a writer, historian and an investigative journalist are evidenced by the impressive scope and detail of his research. . . . The material provided in The Last Gasp is so thought provoking, that it is impossible not to at least consider the ideas and assertions put forth, regardless of one’s individual views. This informative and captivating book is an excellent read for undergraduate or graduate students or faculty of criminal justice/ criminology, psychology, political science or sociology.”—Punishment & Society

“Scott Christianson has masterfully chronicled the history of the use of gas to kill human beings. In doing so, he has shown that the Nazi regime drew strength and comfort from the United States' use of the gas chamber beginning nine years before Hitler took power, as well as from the substantial number of gas chamber executions thereafter. While Christianson doesn't claim that the use of the gas chamber here led to the Holocaust, he does highlight ties between the chemical companies who were involved in both gas chambers in the United States and extermination chambers using gas in the Holocaust. This is a truly thought-provoking and eye-opening book.”—Ronald J. Tabak, President, New Yorkers Against the Death Penalty

“Scott Christianson has used his extensive experience as an investigative reporter, criminal justice official, historian, and scholar to probe one of the darkest and most neglected regions of American death penalty history—the story of the gas chamber. This book opens new doors and charts new territory in its gripping historical tale documenting the development and use of lethal gas as a method of execution in the United States. As one well acquainted with the realm of capital punishment history and research, Christianson has produced a stellar work that sheds new light on many of the central issues affecting executions.”—Dr. Charles S. Lanier, Director of the Capital Punishment Research Initiative (CPRI), Hindelang Criminal Justice Research Center, University at Albany

“By tracing the links between American capital punishment, weapons of mass destruction and Nazi gas chambers, The Last Gasp gives an added dimension to our thinking about the American death penalty. The author has done a great deal of original research and has produced a very thorough history of an interesting and hitherto little known subject.”—David Garland, author of The Culture of Control and Punishment and Modern Society

"Christianson has done for lethal gas what others have done for hanging, electrocution, and lethal injection: told its history in a compelling manner. He provides an authoritative story of the way lethal gas was appropriated for use as a technology of execution.”—Austin Sarat, author of When the State Kills: Capital Punishment and the American Condition

"In an astonishing, deeply probing and relentless search of the history of the gas chamber, Scott Christianson has made a vital contribution to the understanding that the quest for a 'humane' method of execution must ultimately be fruitless."—Rabbi Leonard I. Beerman, Founding Rabbi of Leo Baeck Temple, Los Angeles and Member, Board of Directors, Death Penalty Focus