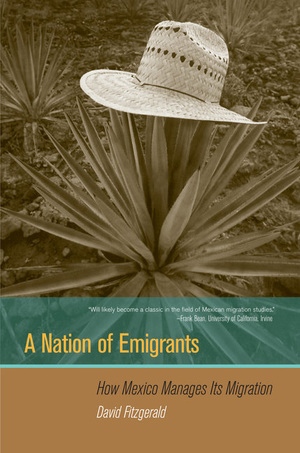 A Nation of Emigrants How Mexico Manages Its Migration

What do governments do when much of their population simply gets up and walks away? In Mexico and other migrant-sending countries, mass emigration prompts governments to negotiate a new social contract with their citizens abroad. After decades of failed efforts to control outflow, the Mexican state now emphasizes voluntary ties, dual nationality, and rights over obligations. In this groundbreaking book, David Fitzgerald examines a region of Mexico whose citizens have been migrating to the United States for more than a century. He finds that emigrant citizenship does not signal the decline of the nation-state but does lead to a new form of citizenship, and that bureaucratic efforts to manage emigration and its effects are based on the membership model of the Catholic Church.

David Fitzgerald is Assistant Professor of Sociology at the University of California, San Diego.

“Fitzgerald . . . offers what is, to date, one of the most comprehensive looks into the politics and administration of emigration. . . . A Nation of Emigrants raises new questions that will lead migration scholars to more thoughtfully consider the emigration story that unfolds alongside immigration history.”—Hispanic American Historical Review

“Provides readers with keys to understanding the immense impact of immigration, not only on receiving countries, but on the sending society.”—Political Science Quarterly

“This book begins to fill a clear gap in our knowledge. . . . interesting, rich, and detailed . . . fascinating . . . provides an excellent starting point for the development of a political sociology of emigration.”—American Journal of Sociology

“A readable and engaging book that raises provocative questions and presents original arguments that enrich the burgeoning literature on migrant-sending states.”—Journal of Politics

“Empirically rich and admirably free of jargon, this work captures a new trend of states to strengthen ties with their expatriate communities abroad. A major contribution to the emergent literature on 'emigrant citizenship'.”—Christian Joppke, The American University of Paris

“David Fitzgerald's highly original work ingeniously combines intensive field work, statistical analysis, and historical comparison (based on the pioneer work of Paul Taylor in 1928-34) to examine how massive international migration over an extended period, such as has taken place between Mexico and the United States from the late nineteenth century to the present, drives a reconfiguration of the traditional relationship between government, territory, and people that is the foundation of the nation-state. Looking at the process from the Mexican perspective, Fitzgerald persuasively challenges those who argue that these changes undermine sovereignty and demonstrates instead that it is the continued strength of sovereignty that is driving the reconfiguration of the traditional three-partite relationship toward what he terms 'citizenship à la carte.' This lucid work also casts new light on the vital links between Mexico and the United States, links that must be taken into consideration to fashion a viable U.S. immigration policy.”—Aristide R. Zolberg, author of A Nation by Design: Immigration Policy in the Fashioning of America


“In A Nation of Emigrants, David Fitzgerald offers scholars and the public something they have sorely lacked: a full and complete picture of Mexican immigration to the United States. His groundbreaking telling of the Mexican side of the story challenges the myth of Mexico's desire to promote the emigration of its citizens. He expertly combines data from multiple sources to show Mexican officials have struggled historically to manage the practical and symbolic consequences of a massive demographic outflow over which they had little control. In doing so, he contributes critical new pieces to the historical puzzle of Mexico-U.S. migration and offers a welcome correction to what until now has been a highly one-sided account.”—Douglas S. Massey, Princeton University

"Likely to become a classic in the field of Mexican migration studies."—Frank Bean, University of California, Irvine
Read More >