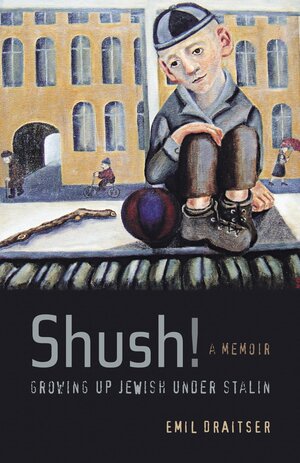 Shush! Growing Up Jewish under Stalin A Memoir

Many years after making his way to America from Odessa in Soviet Ukraine, Emil Draitser made a startling discovery: every time he uttered the word "Jewish"—even in casual conversation—he lowered his voice. This behavior was a natural by-product, he realized, of growing up in the anti-Semitic, post-Holocaust Soviet Union, when "Shush!" was the most frequent word he heard: "Don't use your Jewish name in public. Don't speak a word of Yiddish. And don't cry over your murdered relatives." This compelling memoir conveys the reader back to Draitser's childhood and provides a unique account of midtwentieth-century life in Russia as the young Draitser struggles to reconcile the harsh values of Soviet society with the values of his working-class Jewish family. Lively, evocative, and rich with humor, this unforgettable story ends with the death of Stalin and, through life stories of the author's ancestors, presents a sweeping panorama of two centuries of Jewish history in Russia.

Emil Draitser is Professor of Russian at Hunter College of the City University of New York. In addition to his twelve books, his work has also appeared in the Los Angeles Times, the Partisan Review and the North American Review.

“This painful and acutely observed memoir will resonate with many readers.”—Publishers Weekly

“Speaks volumes about the steep price of decades of institutionalized anti-Semitism, and about the long and difficult journey to get out from under its shadow.”—Irena Smith J Jewish News Weekly Of N Cal

“Sharp and eloquent. . . . This is a must-read for all of us so as to better appreciate the freedoms we have. . . . We should be thankful to Prof. Draitser for having written this book.”—Alan Jay Gerber The Jewish Star

“Poignant. . . . The scholarly Draitser and the [child character in the story] come together to make historical and emotional sense of a seemingly paradoxical upbringing.”—Amelia Glaser, University of California, San Diego Slavic & East European Jrnl

“A wonderfully evocative memoir that captures the experience of a Jewish family in Soviet Odessa with poignancy and humor.”—East European Jewish Affairs

“[A] remarkable memoir. . . . The ‘human’ side of the saga is a warm account of family life and a vivid picture of daily existence, but in counterpoint to this is the growing awareness of the family’s hazardous status.”—D. B. Johnson Choice

“In this minutely observed and evocatively written memoir, he skillfully draws on the often compelling life stories of his grandparents and other relatives to weave a sprawling tale that ably depicts the harrowing history of Jews in Soviet-controlled Ukraine.”—Library Journal

“The hardships experienced by Soviet Jews are poignantly described in this memoir.”—Morton I. Teicher The Jerusalem Post

"[Shush!] is a first-rate memoir [which] affords us an intriguing glimpse of a distinctive world long gone . . . 1948 Odessa, as described by Draitser, uncannily recalls Orwell's 1984 London . . . Yet, [it] is far from a gloomy read. It is packed with well-told anecdotes . . . about [Draitser's] family, and the jokes they told each other to keep their spirits up, especially in the dark months of [Stalin's anti-Semitic] campaigns."—The Jerusalem Report

"Although the overt reason [of emigration] was being blacklisted for a satirical article deemed critical of an important Soviet official, Shush! lays bare a deeper, lifelong struggle juggling the strands of [the author's] Russian and Jewish identities in a country where anti-Semitism was rampant."—The Jewish State

"Have you ever read a book that perfectly articulates how you see the world? A book that you can show to your friends when you don’t feel like explaining your life view and say, ‘Here, read this, and you will understand me?’ Shush! is such a book for me. Even if you’re not a Russian-born Jew raised on latkes, pogroms, and [the great Yiddish actor] Mikhoels, you’ll enjoy this book to get a perspective at a unique time in history (Odessa during Stalinism) and of someone who maps out very well how he finally embraced his Jewish identity."—Vicky Boykis Blog

"Emil Draitser's autobiographical book has to be recommended for all courses on Russian Jewish culture and history. The author has a warm narrative voice and an excellent understanding of anthropological details. He has successfully created a vivid picture of the epoch which is little known to contemporary readers."—Yiddish Forward

“[Draitser] looks back, blending historical overview with a present-tense narrative of how it feels to be a child taught to despise his culture. More than the commentary, the unforgettable drama––and the answer to the racism––is the celebration of Jewish family life and the richness of Yiddish, from the curse words to the endearments.”—Hazel Rochman Booklist

“A significant contribution to our understanding of life in the Soviet Union and to the vital importance of speaking out against oppression.”—Buffalo Jewish Review

"[Draitser's] narrative eloquently testifies to the persistence of Russian Jews in maintaining their identity as well as to the value of the protest movement on their behalf."—Foreword

“Written with warmth and passion, Draitser gives the reader an intimate peak into his life, his family, and his thoughts. In the process, Draitser presents the reader with an unprecedented glimpse into what life was like for Jewish people living under Stalin. . . . This book is a must read for anyone with an interest in Jewish History, the Social history of the Soviet Union, and in simply reading a well-wrought and compelling account of one man’s unforgettable life.”—History In Review

“Ironically it is we as readers who are now to be the benefactors again and again from the advancing ages of the Jewish survivors of many of last millennium’s tragic and hideous history as they, mindful of the menacing passage of time, are now reaching for the pen, often at the risk of great pain to themselves while time permits, in order to leave for us their stories.”—Jewish Book World

“A significant contribution to our understanding of life in the Soviet Union and to the vital importance of speaking out against oppression.”—Jewish Post & Opinion/About Books

"Emil Draitser is authentic and honestly self-critical, while also full of humor and warmth. Shush! is a great tribute to the tenacity of a people who kept their identity and loyalty intact even when threatened with dire consequences."—Irena Grudzinska Gross, author of The Scar of Revolution

"A wonderfully evocative memoir of childhood and adolescence during one of the most tragic epochs in Russian history. As grim as the historical background of the memoir is, the mood is redeemed by Draitser's perfectly Odessan Jewish humor, sad yet optimistic, compared with that of another great Odessan, Isaak Babel."—Lara Vapnyar, author of There are Jews in My House and Memoirs of a Muse

"Emil Draitser resurrects the world of his Jewish childhood in the Soviet Union touchingly and with a great sense of humor, a truly rare quality."—Solomon Volkov, author of Shostakovich and Stalin and The Magical Chorus: A History of Russian Culture from Tolstoy to Solzhenitsyn

"Emil Draitser's memoir tells me, adroitly and movingly, more about being a child in Stalin's Russia than all the fiction and nonfiction I had read before put together. His work has worldwide appeal."—David Westheimer, author of Von Ryan's Express and Death is Lighter than a Feather

"A poignant and gripping book. . . . A compelling memoir. . . . A sweeping panorama of the Jewish history in Russia, this richly documented work is a remarkable humanitarian contribution and a challenge to the continued silence in Russia surrounding its persecution of Jews. The volume touches a nerve and is written with a depth of feeling. The reader will appreciate the skilled craftsmanship that elevates Draitser's perfect gem of a memoir to fine literature."—Notes on Contemporary Literature

"Vivid and engaging. . . .The most moving episodes are concerned with Draitser's coming to terms with his Jewish identity. . . . Elegantly and warmly written, this volume will be of interest to scholars exploring Jewish life in the Soviet period. . . . Despite the dramatic nature of the material, the stories are told with humor. A welcome addition to curricula in Russian culture, as well as for Jewish studies, sociology, history, and psychology."—Slavic and East European Journal

“An intimate account of an extraordinarily difficult period in Jewish history, written with such erudition, elegance, texture, and humor. This immensely enjoyable book makes a consequential -- and little understood -- era come alive through the prism of the author’s personal experience and enviable writing style. One can only hope that this book will receive the large audience it so richly deserves.” --David A. Harris, Executive Director, American Jewish Committee

part one
1 How I Failed My Motherland
2 Fathers at War
3 Path to Paradise
4 What’s in a Name!
5 Black Shawl
6 Us Against Them
7 I Don’t Want to Have Relatives!
8 Friends and Enemies
9 The Girl of My Dreams
10 How They Laugh in Odessa

part three
18 On Commissars, Cosmopolites, and Lightbulb Inventors
19 Them!
20 No Kith, No Kin
21 Grandpa Uri
22 Missing Mikhoels
23 Black on White
24 Time Like Glass
25 The Death of Stalin