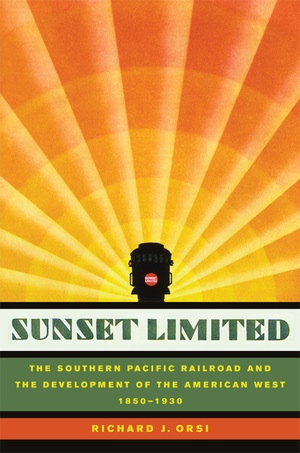 Sunset Limited The Southern Pacific Railroad and the Development of the American West, 1850-1930

The only major U.S. railroad to be operated by westerners and the only railroad built from west to east, the Southern Pacific acquired a unique history and character. It also acquired a reputation, especially in California, as a railroad that people loved to hate. This magisterial history tells the full story of the Southern Pacific for the first time, shattering myths about the company that have prevailed to this day. A landmark account, Sunset Limited explores the railroad's development and influence—especially as it affected land settlement, agriculture, water policy, and the environment—and offers a new perspective on the tremendous, often surprising, role the company played in shaping the American West.

Based on his unprecedented and extensive research into the company's historical archives, Richard Orsi finds that, contrary to conventional understanding, the Southern Pacific Company identified its corporate well-being with population growth and social and economic development in the railroad's hinterland. As he traces the complex and shifting intersections between corporate and public interest, Orsi documents the railroad's little-known promotion of land distribution, small-scale farming, scientific agriculture, and less wasteful environmental practices and policies—including water conservation and wilderness and recreational parklands preservation.

Meticulously researched, lucidly written, and judiciously balanced, Sunset Limited opens a new window onto the American West in a crucial phase of its development and will forever change our perceptions of one of the largest and most important western corporations in the late nineteenth and early twentieth centuries.

Richard Orsi is Professor Emeritus of History at California State University, Hayward, coauthor of The Elusive Eden: A New History of California (third edition, 2002), and editor of the California History Sesquicentennial Series.

“Orsi’s long-awaited magnum opus delivers a powerful climax to a distinguished scholar’s career. . . . Sunset Limited offers a massive and compelling reinterpretation of the mighty Southern Pacific Railroad during its late nineteenth and early twentieth century glory days. A truly landmark work, Sunset Limited will undoubtedly assume a prominent and enduring place among the essential histories of California and the American West.”—American Studies Journal

"This is an important book, well-written and extensively documented, a work of profound revisionism for western history, agricultural history, natural history, and business history."—American Historical Review

“A fresh and revealing slant on the history of a company that did more to influence the development of the Far West than any other. . . . With surgical precision Orsi lays out areas of interest by placing them in a context forged from exhaustive research in company and other archives. . . . Orsi is an advocate whose goal is not to whitewash the SP but rather to make a strong case for his client from evidence hitherto ignored or not available. in this quest he succeeds admirably. . . . Orsi has produced a seminal work in several respects. It is revisionist history in the best sense of the term, casting the role of the SP in a radically different light. It emphasizes as few other historians have done the decisive role played by railroads in regional development. perhaps most important, Orsi has succeeded in providing a fresh approach to the writing of railroad history, one that brings out areas of corporate activity that have been neglected by conventional approaches. A work that has been long in the making, it has been well worth the wait.”—Maury Klein Enterprise & Society

“Sunset Limited explores the railroad’s development and influence--especially as it affected land settlement, agriculture, water policy, and the environment--and offers a new perspective on the company’s role in shaping the American West.”—Huntington Fronteirs

“Orsi's narrative writing style will appeal not just to the scholar but to anyone interested in railroad history.”—Nathan E. Bender Library Journal

“Orsi artfully weaves corporate history with social history to show the impact of the steel horse on frontier settlement . . . a remarkable study for those intrigued by the history of American railroading and the development of the West—and of American capitalism.”—Publishers Weekly

“With the extensive research that Orsi presents, this book will be a boon to future scholars of California and Western U.S. history. . . . While it was once the most powerful entity throughout the West, the Southern Pacific no longer exists, except as a historical artifact. But its legacy in the development of the West remains to be fought over. In ‘Sunset Limited,’ Orsi mounts a strong case for considering the benefits of the much-maligned Octopus.”—Joshua Spivak San Francisco Chronicle

“This magisterial history tells the full story of the Southern Pacific for the first time, shattering myths about the company that have prevailed to this day. . . . Meticulously researched, lucidly written, and judiciously balanced, Sunset Limited opens a new window onto the American West in a crucial phase of its development and will forever change our perceptions of one of the largest and most important western corporations in the late nineteenth and early twentieth centuries.”—Scale Rails

“Superbly researched and written in clear and concise prose, Sunset Limited is the finest book ever written on the history of the American West’s most important railroad network.”—William Deverell Southern California Qtly

“Impressive. . . . Orsi’s daunting task is to convince us that the Southern Pacific’s bad press over many years was, in many cases, undeserved. This reviewer must reluctantly admit that Orsi is pretty convincing.”—Richard H. Dillon True West Publishing

"An extraordinary book by a master historian! Orsi demonstrates that the Southern Pacific was not simply a predatory corporation obsessed with maximizing its profits and political power; it had a strong sense of the public good and a devotion to building stable, prosperous communities. This superb book should be required reading for all historians of the West, business, and the environment."—Donald J. Pisani, author of Water and American Government

“This deep and extensive examination of the Southern Pacific's development activities in California will encourage readers to look beyond the overblown rhetoric of the railroad's many political enemies and see afresh its many positive economic accomplishments as it worked to build the Twentieth-Century West. Orsi’s presentation is as luminous as it is impressive”—Carlos Schwantes, author of Going Places: Transportation Redefines the Twentieth Century West

“This brilliantly researched and beautifully written study of one of America's greatest railroads offers wonderful insights into both transportation and Western history. Orsi places the early history of the Southern Pacific Railroad in proper focus by skillfully untangling the long-standing Octopus myth. This work deserves to be called a landmark in the field.”—H. Roger Grant, author of Follow the Flag: A History of the Wabash Railroad Company

"Sunset Limited illuminates not only the workings and ambitions of the Southern Pacific railroad but teaches us a great deal about the late nineteenth and early twentieth century American West as well. This is a wonderful scholarly study: remarkably thorough, ambitious, and gracefully rendered."—William Deverell, author of Railroad Crossing: Californians and the Railroad, 1850-1910
Read More >

PART I: FOUNDATIONS
1. “These Mountains Look Too Ugly and I See Too Much Work Ahead”: Building the Southern Pacific Company, 1850–1930
2. Men of Vision: Southern Pacific Leaders, Land, Agriculture, and the Development of California and the West

PART II: LAND SETTLEMENT
3. “Stand on the Rights of the Company and Make a Square Fight of It”: Land-Grant Myths, Conflicts with Government, and Squatterism
4. The Mussel Slough Affair
5. A Land of “Well-tilled Little Farms”: Land-Grant Development
6. Promoting the Far West

PART III: WATER
7. “The Satisfactory Supply Is Yet Undiscovered”: The Southern Pacific as a Pioneer Water Developer
8. Private Irrigation
9. “This Splendid Country Is to Be Reclaimed”: Public Irrigation
10. “The Government Is Hard to Deal With”: Federal Reclamation

PART IV: AGRICULTURE
11. Promoting Scientific Agriculture
12. “The Damndest Railroading You Ever Heard Of”: Marketing the Produce of Western Farms