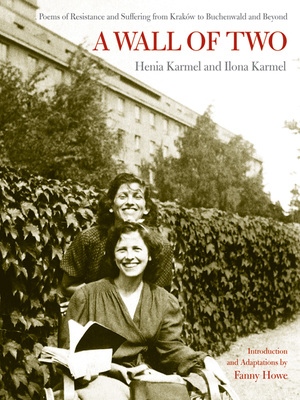 Buchenwald survivors Ilona and Henia Karmel were seventeen and twenty years old when they entered the Nazi labor camps from the Kraków ghetto. These remarkable poems were written during that time. The sisters wrote the poems on worksheets stolen from the factories where they worked by day and hid them in their clothing. During what she thought were the last days of her life, Henia entrusted the poems to a cousin who happened to pass her in the forced march at the end of the war. The cousin gave them to Henia's husband in Kraków, who would not locate and reunite with his wife for another six months.

This is the first English publication of these extraordinary poems. Fanny Howe's deft adaptations preserve their freshness and innocence while making them entirely compelling. They are presented with a biographical introduction that conveys the powerful story of the sisters' survival from capture to freedom in 1946.

Henia Karmel and Ilona Karmel were born to an affluent and distinguished family in Kraków. After the war, they both eventually emigrated to the United States, where they continued to write. Henia Karmel is author of Marek and Lisa. Ilona Karmel is author of An Estate of Memory. Fanny Howe is the author of, among other books, On the Ground, Gone (UC Press), and Selected Poems (UC Press), winner of the Commonwealth Club Gold Medal for poetry and The Lemore Marshall Poetry Prize from the Academy of American Poets. Selected Poems was also one of the Village Voice’s Best Books of the Year.

“A stirring collection of poems . . . . The skill behind these poems is evident instantly—and remarkable for writers so young—but because of the circumstances behind their creation, they also reside in another realm entirely. One can understand how they moved fellow inmates listening to them recited in those wretched circumstances. Their emotional power has not lessened over the years.”—Robert Leiter Jewish Exponent

“Nothing can better describe the message of this moving collection than the final sentence of the authors’ ‘preface’ written sixty years ago: ‘These poems, and thousands of other creations, form one cry only: ’Remember’.”—European Legacy

“This book . . is essential, a major contribution to Jewish literature and to world poetry.”—Aviya Kushner Jerusalem Post

“[The poems] hone in on a sense of looming threat, evoking the state of captivity as relentlessly as Jacobo Timerman did in sections of Prisoner Without a Name, Cell Without a Number.”—Ari Messer San Francisco Bay Guardian

"Ilona Karmel once wrote of the work of turning 'the cold, old-fashioned, iron key of memory.' These recovered poems of Ilona and her elder sister Henia open the space behind memory's door, and it is on fire with defiant passion -with longing, with terror, and the raw drive to bear witness in the one way possible to the life-in-death of the camps. Henia writes, 'These poems came about when I was still creating myself.' The two sisters here are speaking themselves and each other into existence; and this essential work of claiming our humanity has rarely been so costly, and so moving."—Allen Grossman

"The book is a riveting read. The subject, of course, is very compelling and the poems move with great plainness, vividness, and force. The girls survived, though barely, because they were young and strong and because the German war machine needed their bodies. The book is artfully designed to convey the arc of their story from capture to freedom in 1946, and there is, as far as I know, nothing quite like it in the vast literature of the Holocaust. A unique and moving book, of historical significance, rendered into English by one of our most gifted American poets."—Robert Hass

List of Illustrations
Preface: To an Unknown Reader
Acknowledgments
Introduction
Key to Translators