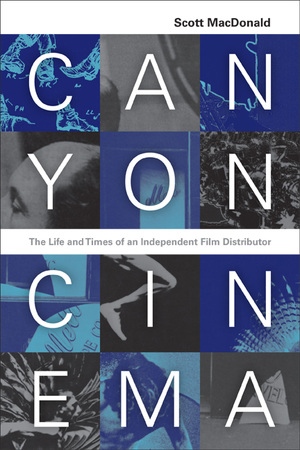 Canyon Cinema The Life and Times of an Independent Film Distributor

Bringing alive a remarkable moment in American cultural history, Scott MacDonald tells the colorful story of how a small, backyard organization in the San Francisco Bay Area emerged in the 1960s and evolved to become a major force in the development of independent cinema. Drawing from extensive conversations with men and women crucial to Canyon Cinema, from its newsletter Canyon Cinemanews, and from other key sources, MacDonald offers a lively chronicle of the life and times of this influential, idiosyncratic film exhibition and distribution collective. His book features many primary documents that are as engaging and relevant now as they were when originally published, including essays, poetry, experimental writing, and drawings.

Scott MacDonald is author of the five volumes of the Critical Cinema series (UC Press), of The Garden in the Machine: A Field Guide to Independent Films about Place (UC Press), and of several other books on avant-garde film and on institutions that have kept avant-garde film alive. He is currently Visiting Professor of Film History at Hamilton College and at Harvard University.

“A exemplary demonstration that scholarship can be both intelligent and fun to read.”—Film Comment

“Fills a major gap in our knowledge of the history of avant-garde film.”—Artforum

"MacDonald's selections tread a pitch-perfect path between being comprehensive and making an engrossing and illuminating narrative. He has perfected his voice, and controls the entire history of U.S. avant-garde film with an easy and graceful confidence."—David E. James, author of The Most Typical Avant-Garde: History and Geography of Minor Cinemas in Los Angeles