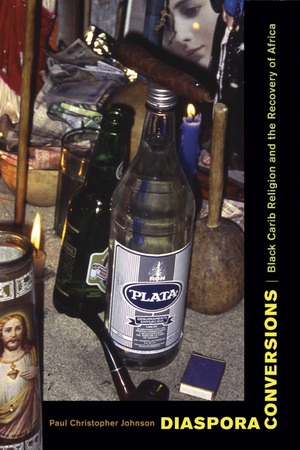 Diaspora Conversions Black Carib Religion and the Recovery of Africa

By joining a diaspora, a society may begin to change its religious, ethnic, and even racial identifications by rethinking its "pasts." This pioneering multisite ethnography explores how this phenomenon is affecting the remarkable religion of the Garifuna, historically known as the Black Caribs, from the Central American coast of the Caribbean. It is estimated that one-third of the Garifuna have migrated to New York City over the past fifty years. Paul Christopher Johnson compares Garifuna spirit possession rituals performed in Honduran villages with those conducted in New York, and what emerges is a compelling picture of how the Garifuna engage ancestral spirits across multiple diasporic horizons. His study sheds new light on the ways diasporic religions around the world creatively plot itineraries of spatial memory that at once recover and remold their histories.

Paul Christopher Johnson is Associate Professor in the Department of History and the Center for Afroamerican and African Studies at the University of Michigan, and author of Secrets, Gossip and Gods: The Transformation of Brazilian Candomblé.

"I'm extremely impressed by Johnson's book. Diaspora Conversions offers an outstanding combination of theoretical acuity, erudition, and ethnographic prowess. It is bound to become highly influential in the study of religion in motion."—Manuel A. Vasquez, co-author of Globalizing the Sacred: Religion Across the Americas

"Johnson's work bursts through the present conversations on African diaspora and brings us onto entirely new ground, shattering simplistic ideas and replacing them with critical distinctions. This smart and talented ethnographer succeeds in combining detailed and rich ethnographic fieldwork with an unrelentingly critical and sophisticated analysis. Johnson's work brings to life one of the most central, perhaps the most central, classic question of African American anthropology: "How is Black culture constituted, even through dislocation and displacement?"—Elizabeth McAlister, author of Rara! Vodou, Power, and Performance in Haiti and Its Diaspora

"Diasporic Conversions convincingly breaks new ground by showing how the meaning of 'homeland' is fundamentally a product of historically situated and contested forms of collective imagination. What will make Johnson's book a benchmark in the study of the African diaspora, and diasporic situations more generally, is that it is not just a richly documented and rigorously argued ethnography, but a genuine anthropology of historical consciousness."—Stephan Palmié, author of Wizards and Scientists: Explorations in Afro-Cuban Modernity and Tradition