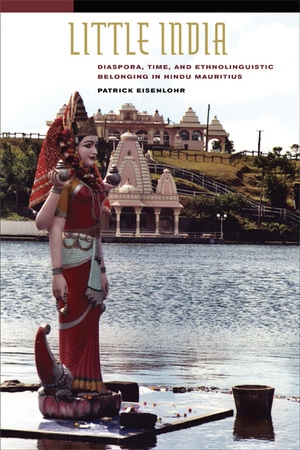 Little India is a rich historical and ethnographic examination of a fascinating example of linguistic plurality on the island of Mauritius, where more than two-thirds of the population is of Indian ancestry. Patrick Eisenlohr's groundbreaking study focuses on the formation of diaspora as mediated through the cultural phenomenon of Indian ancestral languages—principally Hindi, which is used primarily in religious contexts. Eisenlohr emphasizes the variety of cultural practices that construct and transform boundaries in communities in diaspora and illustrates different modes of experiencing the temporal relationships between diaspora and homeland.

Patrick Eisenlohr is Assistant Professor of Anthropology at Washington University.

“An informative exposition . . . . He has convincingly fulfilled his promise to account for the formation in Mauritius of a Diaspora mediated through Indian ancestral languages.”—Anthropological Linguistics

"Through the depth, subtlety and breadth of his intellectual engagement with Mauritius, Eisenlohr establishes himself as one of our leading scholars on South Asia. Empirically rich, theoretically informed, imaginative, nuanced, and powerfully argued, Little India should transform how we think about language ideology, quotidian and ritual practice, and the complex intersections of national and transnational politics of culture."—Don Brenneis, Anthropology, UC Santa Cruz

List of Illustrations
Acknowledgments
Note on Transliteration and Orthography