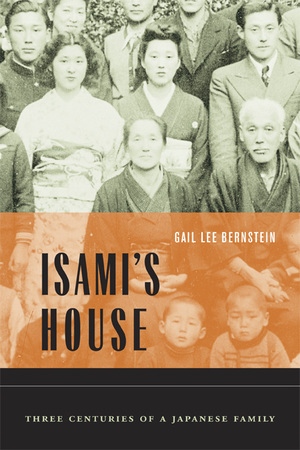 In this powerful and evocative narrative, Gail Lee Bernstein vividly re-creates the past three centuries of Japanese history by following the fortunes of a prominent Japanese family over fourteen generations. The first of its kind in English, this book focuses on Isami, the eleventh generation patriarch and hereditary village head. Weaving back and forth between Isami's time in the first half of the twentieth century and his ancestors' lives in the Tokugawa and Meiji eras, Bernstein uses family history to convey a broad panoply of social life in Japan since the late 1600s. As the story unfolds, she provides remarkable details and absorbing anecdotes about food, famines, peasant uprisings, agrarian values, marriage customs, child-rearing practices, divorces, and social networks. Isami's House describes the role of rural elites, the architecture of Japanese homes, the grooming of children for middle-class life in Tokyo, the experiences of the Japanese in Japan's wartime empire and on the homefront, the aftermath of the country's defeat, and, finally, the efforts of family members to rebuild their lives after the Occupation. The author's forty-year friendship with members of the family lends a unique intimacy to her portrayal of their history. Readers come away with an inside view of Japanese family life, a vivid picture of early modern and modern times, and a profound understanding of how villagers were transformed into urbanites and what was gained, and lost, in the process.

Gail Lee Bernstein is Professor of History at the University of Arizona. She is the author of Haruko's World: A Japanese Farm Woman and Her Community (1996), editor of Recreating Japanese Women (California, 1991), and coeditor of Public Spheres, Private Lives (2005) and Japan and the World: Essays on Japanese History and Politics (1988).

“The remarkable history of twelve generations of a single Japanese family.”—Journal Of Asian History

“A unique and fascinating contribution to the field of Japanese social history.”—Japanese Studies

“Rarely does one have the opportunity to use the words “dramatic” and “moving” when reviewing scholarly works, but those descriptions can be applied without reservation to Gail Lee Bernstein’s Isami’s House.”—Monumenta Nipponica

“There simply is no other book like this. No other family history presents such a range of insights into the ways in which individuals, women as well as men, have had to cope with changes wrought by the social modernization of Japanese family culture.”—James L. McClain, author of Japan: A Modern History

“Isami's House is the chronicle of a remarkable family, neither aristocratic nor famous, whose rise and decline seem to parallel Japan's. It makes absorbing reading, affording a panoramic view of a rural family's rise to local prominence at the dawn of the modern Japanese nation state, the expansion of its presence to Tokyo and then the empire, its experience in war and defeat, and finally its postwar reconfiguration as a dispersed urban family.”—Norma Field, author of In the Realm of a Dying Emperor: A Portrait of Japan at Century's End