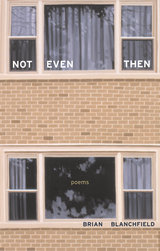 Not Even Then Poems

Not Even Then, the debut collection by Brian Blanchfield, introduces a poetry both compressed and musically fluid, beseechingly intimate and oddly authoritative. Blanchfield conducts readers through a unique, theatrical realm where concepts and personages are enlivened into action: Continuity, Coincidence, Symmetry, and Shame keep uneasy company there with Marcel Duchamp and Johnny Weissmuller, Lord Alfred Douglas and "Blue Boy" Master Lambton, Juliet’s Nurse and Althusser’s Moses.

With its kinked and suspensive language, Not Even Then draws on the lyric tradition, even as it complicates that tradition’s dualism of self and other. Likeness is always under investigation in the book’s irreducible arrangements of alterity. From "Red Habits": "I imagine the interferences explained / in don’t-think-twice and reverse advice / and by habits for both head and breast / hers and hers as red as mine at chamber check. / We are each herself a further interference." No answer rests unquestioned in its turn; even the book title’s cynicism is challenged by a poetics alive to possibility, where Possibility is—impetuously, ecstatically—companionable. "The listener you are," writes Blanchfield, "the less alone."

Brian Blanchfield teaches in the B.F.A. creative writing program at Pratt Institute of Art. His poems have appeared in such publications as Fence, Ploughshares, Slope, and Volt. He lives in Brooklyn, New York.

“With their grammatical displacements, changes of subject and predicate, and whiplash transitions, the poems in Brian Blanchfield's confident debut, NOT EVEN THEN: Poems, appear at first to depict nothing at all. Then they come into focus and portray a life: a young gay man learns to inhabit New York City, seeking out peers and lovers while sifting through information overload. Like the forebears he acknowledges (John Ashbery, Hart Crane), this clever, busy, anxious, flirtatious poet, with his ‘predilections . . . for predicaments,’ can connect anything to anything else. The purposeful clutter and crowded dissonance in Blanchfield's verse heightens his worldly-wise, unlikely charm: ‘If there's a better boy way into metaphysics, / again may I say yours is perfectly pulled across.’”—Stephen Burt New York Times

"'Sifting subtext,' Brian Blanchfield infuses measure with feral ways, blandishments with subtle bafflement. Not since Ashbery's early poetry has so much eloquence shown so little pity ('We have our no, libido, go'). Blanchfield speeds up his vision to catch the flickers in what others tend to see as a continuum—the void-gaps of difference in likeness, the exclusive 'invitational' in the "open." Magnificently unappeased ('Not in thirteen / new ways to play can the one that's wild be reconciled'), Not Even Then makes urbanity and originality go round and round together in one astonishing poem after another.—Calvin Bedient


"The infinite prospect of cityscape and water route surrounds us in these poems where 'sight is what we are within.' Blanchfield's vigorous language, his kinetic syntax and his captivating gift for assembling a new world out of surprising images make Not Even Then one of the lustiest, most electric reads since Hart Crane's White Buildings. In his own words, 'here is a craft. The kind to ride.' A most enjoyable ride indeed."—D. A. Powell

"Lively, intelligent questions of scale and position—of where (& who) the self is vis-a-vis truth—animate the unsteady subjectivity of Brian Blanchfield’s first collection. In gorgeous poems whose slanted insights seem earned and unarguable, 'meaning’s warning' is delivered just in time. 'We said beauty should have to do with us,' writes Blanchfield: his poems are admirably real and extraordinarily rewarding encounters."—Laura Mullen

"Here—from a poet whose language is generous beyond its own constraint—is the welcome news that poetry can expand without being stretched thin, go undeceived without losing its lovingness, and even redeem the future that some of us, otherwise, did not want to enter."—Douglas Crase
Read More >

One First Try and then Another

WEREMEN
Thirteen Point Three Three
Letter to a Silvery Mime in Yellow
Ferdinand, the Prize
Red Habits
The Weremen
Two Moons
Borrowing a Page from Nature
Refinery
If the Blank Outcome in Dominoes Adds a Seventh Side to Dice
The Next Landing
Chercher
From the Selected Burned Letters

KILL DEVIL HILLS
The Earliest Work of Literary Criticism
There Are Five Deacons
String Theory Readymade
Receipt
A Whole Host
Littleness of Being
Even Funnier than Pretending to Do It Is Actually Doing It
Velma
The Matter, with Abjection
Less and Less That Is Not a Hotel Anymore
Aerozona Water Letter
Photograph of without Reference to
The Discoverer of Pluto
The Living Many Go Down One