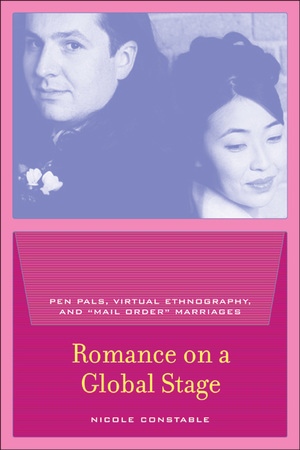 By the year 2000 more than 350 Internet agencies were plying the email-order marriage trade, and the business of matching up mostly Western men with women from Asia, Eastern Europe, and Latin America had become an example of globalization writ large. This provocative work opens a window onto the complex motivations and experiences of the people behind the stereotypes and misconceptions that have exploded along with the practice of transnational courtship and marriage. Combining extensive Internet ethnography and face-to-face fieldwork, Romance on a Global Stage looks at the intimate realities of Filipinas, Chinese women, and U.S. men corresponding in hopes of finding a suitable marriage partner.

Through the experiences of those engaged in pen pal relationships—their stories of love, romance, migration, and long-distance dating—this book conveys the richness and dignity of women's and men's choices without reducing these correspondents to calculating opportunists or naive romantics. Attentive to the structural, cultural, and personal factors that prompt women and men to seek marriage partners abroad, Romance on a Global Stage questions the dichotomies so frequently drawn between structure and agency, and between global and local levels of analysis.

Nicole Constable is Professor of Anthropology and Research Professor at the University Center for International Studies, University of Pittsburgh. She is the editor of Guest People (1996) and author of Maid to Order in Hong Kong (1997), and Christian Souls and Chinese Spirits (California, 1994).

“An intelligent and subtle account of the interplay between ethnicity and gender.”—Caroline Knowles Ethnic And Racial Studies

"Her study presents a fresh, more optimistic view of relationships between international correspondents who meet via the Internet."—Marian J. Rossiter Journal Of Intl Migration & Integration

"Nicole Constable has produced a splendid sequel to her much-praised Maid to Order in Hong Kong. Constable's sensitive ethnography and her international scope insures that we see every Filipino and Chinese woman as a thinking, feeling person, and every American man who is her pen pal and sometimes future husband as far more than a mere cartoon character. Romance on a Global Stage wonderfully complicates the genderings and globalizings of power and emotions."—Cynthia Enloe, author of Bananas, Beaches and Bases

"The rise of feminism in North America has been paralleled by a growth in marriages between Western men and women from the global periphery. Constable's fascinating study explores the multiple desires at work, revealing the anti-feminist reason and feminist surprises in these global romances."—Aihwa Ong, author of Buddha Is Hiding: Refugees, Citizenship, the New America

"Constable adds a new map to the cartographies of desire in this nuanced and fresh account of 'mail-order marriage.' Her original work carefully attends to emotion, sex, and political economy, offering a complex account of gender, marriage, and globalization."—Carole S. Vance, author of Pleasure and Danger: Exploring Female Sexuality


"This innovative and compassionate work maps new formations of desire in the context of globalization. Constable breaks through the stereotypes about transnational pen-pal marriages to enable us to see, in an ethnographically detailed way, how agency and desire are shaped by uneven economic development and how cyber-technologies figure in the production of new global imaginaries."—Ann Anagnost, author of National Past-times: Narrative, Representation, and Power in Modern China

"Constable is a talented and perceptive anthropologist who has mastered the use of the web both as a research tool and a topic of research. Her sensible and timely examination of transnational marriages of American men with women from the Philippines and China relentlessly debunks commonly-held tales about submissive (or manipulative) Asian women and wealthy (or abusive) American men."—Jean-Paul Dumont, author of Visayan Vignettes: Ethnographic Traces of a Philippine Island
Read More >