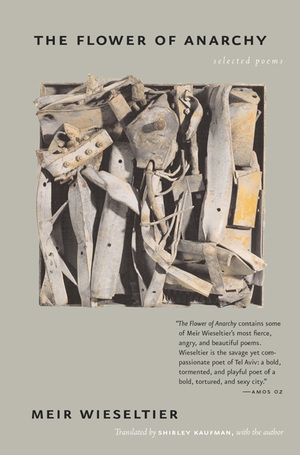 The Flower of Anarchy Selected Poems

Meir Wieseltier's verbal power, historical awareness, and passionate engagement have placed him in the first rank of contemporary Hebrew poetry. The Flower of Anarchy, a selection of Wieseltier's poems spanning almost forty years, collects in one volume, for the first time, English translations of some of his finest work. Superbly translated by the award-winning American-Israeli poet-translator Shirley Kaufman—who has worked with the poet on these translations for close to thirty years—this book brings together some of the most praised and admired early poems published in several small books during the 1960s, along with poems from six subsequent collections, including Wieseltier's most recent, Slow Poems, published in 2000.

Born in Moscow in 1941, Wieseltier spent the first years of his life, during the war, as a refugee in Siberia, then again in Europe. He settled in Tel-Aviv a few years after coming to Israel in 1949 and has lived there ever since. A master of both comedy and irony, Wieseltier has written powerful poems of social and political protest in Israel, poems that are painfully timeless. His voice is alternately anarchic and involved, angry and caring, trenchant and lyric.

Meir Wieseltier studied at the Hebrew University in Jerusalem, published his first poems at the age of eighteen, and has won many literary awards, as well as the Israel Prize, his country's highest honor for lifetime achievement, awarded in 2000 by the Israeli establishment to its most anti-establishment poet. Shirley Kaufman, prize-winning American-Israeli poet and translator, has published eight volumes of her own poems, the two most recent of which are: Roots in the Air: New and Selected Poems (1996), and Threshold (2003). She has also published several books of translations from Hebrew of the works of Amir Gilboa and Abba Kovner, and from Dutch of the work of Judith Herzberg.

"Kaufman, herself a poet, does a wonderful job of rendering Wieseltier's richly expressive, nuanced, allusive Hebrew into an American English so authentic and vibrant that many of the poems in this book sound as if originally written in it."—David Hornik Jerusalem Post

“This is, indeed, an audacious collection of Israeli poetry.”—Debbie Schoeneman Jewish Book World

"The Flower of Anarchy contains some of Meir Wieseltier’s most fierce, angry, and beautiful poems. Wieseltier is the savage yet compassionate poet of Tel Aviv: a bold, tormented and playful poet of a bold, tortured and sexy city."—Amos Oz

"The distinguished and gifted poet-translator Shirley Kaufman gives us Meir Wieseltier's poems as poetry. The vibrancy and momentum of these versions are extraordinary."—Adrienne Rich

"We almost don’t have this kind of poetry in America—erotic, political, audacious, wise, brutal. I die that I can’t share the Hebrew, but what the music is comes through, as well as the voice, the immense resonant voice. This book is a great gift."—Gerald Stern

"A master-draftsman of Tel Aviv’s bleaker landscapes, Meir Wieseltier is also a brutal observer of his society and its dominant myths. This gathering of the poet’s work by Shirley Kaufman takes us into the dark heart of Wieseltier’s verse—from the peeling plaster and seamy sweatshops of Tel Aviv to the ‘dull khaki light’ of the country’s larger cultural prospect. All is here, in translations that faithfully convey both the harshness and clarity that have made Wieseltier one of the most influential Israeli poets of his time."—Peter Cole, translator of Selected Poems of Solomon Ibn Gabirol and author of Hymns & Qualms


"Layered and nuanced in his poetic expression, and exceptionally gifted in his vivid, self-reflexive metaphors, Wieseltier is a poet of great poetic vision and verbal power. Working closely with the poet, Shirley Kaufman has turned this book into an authoritative volume of the work of Israel's leading living poet."—Chana Kronfeld, author of On the Margins of Modernism: Decentering Literary Dynamics, and co-translator (with Naomi Seidman) of "The First Day" and Other Stories by Dvora Baron
Read More >