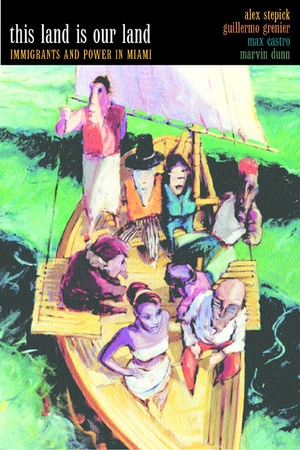 This Land Is Our Land Immigrants and Power in Miami

Becoming American
It's Not a One-Way Street


On Thanksgiving Day 1999, a six-year-old boy, Elián González, was found floating on an inner tube three miles off the Florida coast. He was reportedly surrounded by dolphins and, more surprisingly, in spite of being in the water for three days, he was not sunburned at all. The U.S. Coast Guard spotted the boy, along with the two other survivors of a vessel that had been carrying fourteen passengers from Cuba. The other eleven, including the boy's mother, had apparently drowned. The Coast Guard immediately transferred Elián to Joe DiMaggio Children's Hospital. The two other survivors were rescued after they swam to Key Biscayne, a few miles from downtown Miami.

Two days after the boy was found, Elián's father in Cuba declared that he wanted his son back. Under normal circumstances, the sole surviving parent's wishes are the last word on such matters. However, there is nothing normal about dealing with Cuba or Cuban Americans. Miami Cubans passionately argued that Elián's mother had died to give the boy freedom from Castro's dictatorship and that he should be permitted to stay in Miami with his great uncle, Lázaro González. After a considerable delay and interviews in Cuba with the boy's father, on January 6, 2000, Janet Reno announced, "This little boy, who has been through so much, belongs with his father." It was not only the little boy who went through so much during those six months; the community where the events unfolded would never be the same either. The drama preceding and following this decision cemented, in the eyes of the nation and the world, Miami's reputation as a city deeply divided along ethnic lines, where ethnicity and immigration combine to create an unstable fulcrum of power and prejudice, and where new arrivals to this country, rather than being disenfranchised, are empowered enough to be regularly accused of prejudice against long-established residents. In this type of community, sometimes heralded as a preview to twenty-first-century United States, Elián's saga served as a magnifying glass, highlighting and at the same time kindling the tensions that have been building up over the past forty years of mass immigration into Miami.

The story of Elián González is worth recounting here, at the beginning of our volume, because it brought even the most peripheral citizens of the region face-to-face with profound issues of identity, power, and prejudice. For nearly everyone, African Americans, non-Hispanic whites, and many other immigrants, the overwhelming question raised by the months of taking sides over whether Elián should stay or go was, "What does it mean to be an American?" For Cuban Americans, even those who never held tightly to the typical anti-Castro dogma, the question became, "What does it mean to be a Cuban in America?"

After Reno announced the Justice Department's decision, Miami's Cuban community declared that it would unleash massive protests. "Let's take action immediately with the objective of paralyzing Miami and paralyzing the airport," urged Alberto Hernandez, a director of the Cuban American National Foundation, speaking to other leaders of the Cuban exile community at a meeting following the announcement. On January 6, hundreds of Miami's Cubans blocked intersections throughout the urban center and cut off access to the Port of Miami and the airport. The "political correctness" of Miami's Cuban community in demanding that Elián stay in the United States was transmitted throughout the world by Miami-Dade County mayor Alex Penelas, who proclaimed at a press conference that county law enforcement officers would not cooperate with the federal authorities in reuniting Elián with his father. If violence broke out, he warned the Clinton administration, "We hold you responsible." The county mayor's comments particularly alienated Miami's non-Cuban communities. At a Town Hall Meeting organized by ABC-TV's "Nightline" on the campus of Florida International University, a non-Cuban speaker from the audience chastised Mayor Penelas for his comments by reminding him that "he was elected to represent all of the citizens of Dade County."

Ultimately, the issue was resolved by force. Before the sun rose on Saturday, April 22, the day before Easter, agents of the Immigration and Naturalization Service (INS) stormed the house of Lázaro González to retrieve Elián. The small number of observers on the scene fortunately gave only token resistance to the well-armed strike force. Pictures of the raid circumnavigated the globe via internet, television, and newspapers. A few hours later, Elián was reunited with his father.

The Miami Cuban community vilified the U.S. government. A Miami Cuban professional in his late twenties exclaimed, "It's a betrayal. They betrayed us. We've been the most loyal supporters of the U.S. How could they do this?" A sobbing Bertha Garcia, a Cuban American who had lived in Miami for thirty-eight years, proclaimed, "I thought it was the most unbelievable thing that I've seen in my life in the United States done to a poor family with a poor house." Cuban American pop stars Gloria Estefan and Andy García expressed their support for Elián remaining in the United States. Even moderate, broad-based organizations like the Cuban-American National Council, criticized the government's strong-arm tactics in a public statement: "We know no precedent for such an extraordinary operation, and cannot understand why the Justice Department deployed a commando tactical force, armed with semiautomatic weapons, face masks, and tear gas, that broke into the home of an innocent American family, the same family that the Justice Department itself had previously entrusted with Elián's care." Seventy Cuban-American leaders of twenty-one exile organizations called for a citywide strike on the following Tuesday to "send a messa

For those opposed to immigration, Miami is a nightmare. Miami is the de facto capital of Latin America; it is a city where immigrants dominate, Spanish is ubiquitous, and Denny's is an ethnic restaurant. Are Miami's immigrants representative of a trend that is undermining American culture and identity?

Drawing from in-depth fieldwork in the city and looking closely at recent events such as the Elián González case, This Land Is Our Land examines interactions between immigrants and established Americans in Miami to address fundamental questions of American identity and multiculturalism. Rather than focusing on questions of assimilation, as many other studies have, this book concentrates on interethnic relations to provide an entirely new perspective on the changes wrought by immigration in the United States. A balanced analysis of Miami's evolution over the last forty years, This Land Is Our Land is also a powerful demonstration that immigration in America is not simply an "us versus them" phenomenon.

"This well-written and compelling story of immigrant resident relations in Miami will be read and enjoyed by lay people and scholars, and will no doubt produce stimulating discussions in classrooms throughout urban America."—Jacqueline Hagan, author of Deciding to Be Legal: A Maya Community in Houston

"Stepick and his colleagues provide a richly-textured and highly-nuanced account of how immigrants are remaking Miami—a city that, in one generation, has been transformed by the influx of Latin American and Caribbean newcomers. Based on long-term direct observation, This Land Is Our Land puts relations between immigrants and established residents on center stage—showing how both have changed as they encounter each other in schools, workplaces, and business and commerce. This well-written book is a must-read for anyone wanting to understand how immigration is changing America."—Nancy Foner, author of From Ellis Island to JFK: New York’s Two Great Waves of Immigration

"A path-setting study that explores power, context, and diversity in the culturally heterogeneous, economically vibrant, and politically dynamic city of Miami. Unpacking the complexities of race, ethnicity, and class, this lucidly written work takes the reader on rugged journeys as immigrants of different national origins strive to become American at their own pace and on their own terms. It provides fresh insight into the long-standing American ambivalence toward immigration, making a fine contribution to the burgeoning literature on immigration and inter-racial dynamics. "—Min Zhou, co-author of Growing Up American: How Vietnamese Children Adapt to Life in the United States


"A valuable account of ethnic relations in Miami by social scientists who live and work there. Informative and useful material for urban sociologists and specialists on immigration."—Alejandro Portes, coauthor of Immigrant America and Professor of Sociology and Director, Center for Migration and Development, Princeton University
Read More >

3. Working in the USA: Ethnic Segregation and
Bureaucratizing Interaction

5. Making It Work: Interaction, Power, and
Accommodation in Inter-Ethnic Relations