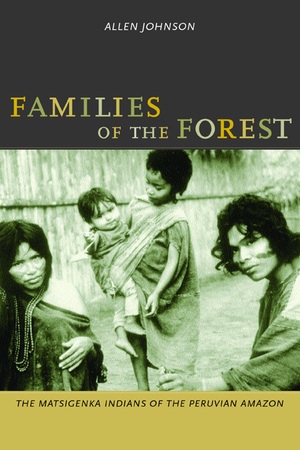 Families of the Forest The Matsigenka Indians of the Peruvian Amazon

The idea of a family level society, discussed and disputed by anthropologists for nearly half a century, assumes moving, breathing form in Families of the Forest. According to Allen Johnson’s deft ethnography, the Matsigenka people of southeastern Peru cannot be understood or appreciated except as a family level society; the family level of sociocultural integration is for them a lived reality. Under ordinary circumstances, the largest social units are individual households or small extended-family hamlets. In the absence of such "tribal" features as villages, territorial defense and warfare, local or regional leaders, and public ceremonials, these people put a premium on economic self-reliance, control of aggression within intimate family settings, and freedom to believe and act in their own perceived self-interest.

Johnson shows how the Matsigenka, whose home is the Amazon rainforest, are able to meet virtually all their material needs with the skills and labor available to the individual household. They try to raise their children to be independent and self-reliant, yet in control of their emotional, impulsive natures, so that they can get along in intimate, cooperative living groups. Their belief that self-centered impulsiveness is dangerous and self-control is fulfilling anchors their moral framework, which is expressed in abundant stories and myths. Although, as Johnson points out, such people are often described in negative terms as lacking in features of social and cultural complexity, he finds their small-community lifestyle efficient, rewarding, and very well adapted to their environment.

Allen Johnson is Professor of Anthropology and Psychiatry at the University of California, Los Angeles. His previous books include The Evolution of Human Societies, 2nd Edition (with Timothy Earle, 2000), and Oedipus Ubiquitous (with Douglass Price-Williams, 1996), which won the 1997 Boyer Prize.

"Families of the Forest constitutes a valuable contribution to the regional ethnography, particularly as regard techniques of subsistence and the organization of communal life, and it will be essential reading for any interested in the area. There is much in the book for the specialist and, especially in the 'everyday close' approach, it also provides an eloquent and accessible account of this montana society for the nonspecialist."—Anthropos

"This is a brilliantly conceived and well-written ethnography."—Kenneth M. Kensinger, author of How Real People Ought to Live: The Cashinahua of Eastern Peru