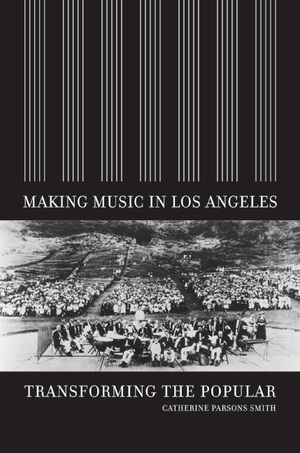 In this fascinating social history of music in Los Angeles from the 1880s to 1940, Catherine Parsons Smith ventures into an often neglected period to discover that during America's Progressive Era, Los Angeles was a center for making music long before it became a major metropolis. She describes the thriving music scene over some sixty years, including opera, concert giving and promotion, and the struggles of individuals who pursued music as an ideal, a career, a trade, a business--or all those things at once. Smith demonstrates that music making was closely tied to broader Progressive Era issues, including political and economic developments, the new roles played by women, and issues of race, ethnicity, and class.

Catherine Parsons Smith is Professor Emerita at the University of Nevada, Reno. She is the author of several books, among them William Grant Still: A Study in Contradictions (UC Press, 1999), which won the ASCAP Deems Taylor Award.

1. Music Making as Popular Practice
PART I. MUSIC FOR THE “PEOPLE”
2. “The Largest and Most Enthusiastic Audience That Ever Has Assembled in the City”: The National Opera Company of 1887
3. “A Precarious Means of Living”: Early Working Musicians and Their Jobs
4. “Popular Prices Will Prevail”: Competing and Cooperating Impresarios
5. Amateurs, Professionals, and Symphonies: Harley Hamilton and Edna Foy
6. “Our Awe Struck Vision”: A Prominent Impresario Reconsidered
PART II. PROGRESSIVE-ERA MUSICAL IDEALISM
7. The “True Temple of Art”: Philharmonic Auditorium and Progressive Ideology
8. “Something of Good for the Future”: The People’s Orchestra of 1912–1913
9. Producing Fairyland, 1915
10. Founding the Hollywood Bowl
PART III. FROM PROGRESSIVE TO ULTRAMODERN
11. Old Competitors, New Opera Companies in 1925
12. The New Negro Movement in Los Angeles
13. Welcoming the Ultramodern
14. Second Thoughts
15. Calling the Tune: The Los Angeles Federal Music Project

Appendix A. Los Angeles Population Growth, with Racial and Ethnic Distribution
Appendix B. Musicians and Teachers of Music in the United States and Los Angeles
Appendix C. A Music Chronology for Los Angeles, 1781–1941
Notes
Bibliography
Index