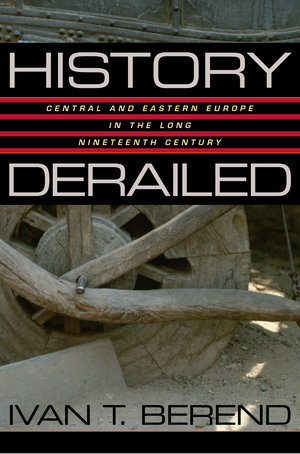 The Emerging West as an
Ideal and Model for the East

In the late eighteenth and early nineteenth centuries, the Central and Eastern European elite, national prophet-poets, intellectuals, and enlightened aristocrats, looked to the West with the greatest admiration. They expressed their dissatisfaction with the state of their own "backward," "underdeveloped," "sleeping" countries, societies in their "childhood," which lacked modern institutions, such as industry, railways, and educational systems, and lagged behind Western Europe by a century. Reformers warned of the danger posed by the inability of their countries to "sustain an independent state" and of the threat of being pushed back "to Asia." They saw that their countries remained outside the main thrust of the modern Western European metamorphosis and were thus defenseless against their more powerful neighbors, subordinate to the more advanced world, and relegated to the periphery of the continent.

These reformers were convinced, however, that they could turn their countries around. Like all those influenced by the zeitgeist of the century, the Enlightenment and the idea of progress, they viewed history as a ladder for climbing from lower to higher stages.

Freedom and progress, progress and economic growth, went together in their minds. These ideas were also borrowed from the West, where the "idea of progress reached its zenith" during the period 1750-1900. Progress, "from being one of the important ideas . . . became the dominant idea" (Nisbet 1980, 171). As Franz (or Ferenc) Liszt, the romantic virtuoso pianist-composer par excellence, said: "We believe in one unending progress, in one untrammeled social future" (Einstein 1947, 347). Karl Marx expressed this way of thinking in the preface to Das Kapital when he compared Britain to continental Europe. The latter suffered from "the incompleteness of [capitalist] development," he wrote. "Alongside of modern evils, a whole series of inherited evils oppress us, arising from the passive survival of antiquated modes of production." Expressing the nineteenth-century belief in progress, he added, "the country that is more developed industrially only shows, to the less developed, the image of its own future" (Marx [1867] 1932, 13).

Stanislaw Konarski, who had spent a decade in the West and had been an observer of the early years of the British Industrial Revolution, became the editor of the first modern Polish periodical, Monitor, and made an urgent plea: "Let us govern ourselves like sensible people. . . . For the God of nature did not search for different clay when he made Poles from what he used for Englishmen" (Brock 1972, 12). At about the same time, in 1791, István Batsányi, a twenty-eight-year-old Hungarian member of Maria Theresa's famous Regiment of Guards in Vienna, wrote "A franciaországi változásokra" (On the Changes in France), a poem celebrating the French Revolution. He passionately warned both the common people and their oppressors to turn their eyes to Paris:

Who have not shaken off the collar of the slave
The yoke that drags you down into your grave
And you, too, sacred kings, who, consecrated, kill
—Since Earth cries out for blood—the subject of your will
To Paris turn your eyes!!! Let France elucidate
For king and shackled slave your future and your fate.

Europe's was a sorry plight,
Dark confusion was her share,
To shake her and put things right,
She needed Rousseau and Voltaire.

In 1911, Constantin Dobrogeanu-Gherea, a Romanian socialist, published his Asupra socialismului în tarile înapoiate (On Socialism in Backward Countries), in which he maintained that "bourgeois capitalism would eventually revolutionize social and economic relations and the mental climate in Eastern Europe" (Hitchins 1994, 76).

From the late eighteenth century to the early twentieth, a series of Central and Eastern European political thinkers, poets, statesmen, and reformers closely watched the ideas and transformation of Western Europe. The leading Hungarian reformer József Eötvös, a member of the revolutionary government of 1848 and one of the main architects of liberal legislation establishing the modern educational system after the Austro-Hungarian Compromise in 1867, noted after the revolution: "Since the time of the French Revolution, the development of most of the European countries demonstrates that the model for new institutions was taken from England; ideas and concepts were copied from France" (Eötvös 1902a, 39). Victor Hugo, Walter Scott, Byron, Schiller, Hobbes, Locke, Rousseau, Voltaire, Montesquieu, and Hegel all inspired him; their books were among the two thousand in his library (Bénye 1972). Eastern European reformers, comparing the situation of their own countries to that of the sparkling ideas and spectacular transformation of the West, noticed the growing gap between the two and looked to the latter as a model to follow. István Széchenyi, an enlightened young Hungarian aristocrat, traveled to Britain in 1822. "England has reached a level higher than ever before achieved by any people, but it is still climbing," he commented in his diary in January of that year. Some months later, he compared what he saw to the Hungarian reality: "I feel profound pain and downheartedness at the situation . . . of our country . . . Our country is sleeping" (Széchenyi and Wesselényi 1985, 110, 212; emphasis added). In his milestone book Hitel (Credit), published in 1830, Széchenyi complained about the "pitiful situation of our country . . . following other nations a century-long distance behind." He expressed his admiration for Britain, which he claimed was "practically the core of the world," and argued that "copying others presents no danger, we can adopt their century-long experiences" (Széchenyi 1830, 139-40, 155-56, 258; emphasis added).

In 1830s Turkey, where one-quarter of the top military-administrative leaders had personal experience of the West (Todorova 1977), reformers also urged their compatriots to follow the Western model. "Only through reforms that will bring Turkey closer to the norms of European life can we get over the enduring political and economic crisis," wrote Mustafa Reshid Pasha. Halil Pasha, the Turkish commander-in-chief and son-in-law of the Sultan, considered the relative weakness of the Ottoman army when he warned, "If we do not adopt European ways, we shall have no choice left but to return to Asia" (quoted by Petrosjan 1977, 63-65; emphasis added).

"France has become our ideal," stated Ion Bratianu, a prominent revolutionary leader of mid-nineteenth-century Romania, and "has the mission to preside over the regeneration of Europe." The French consul in Bucharest reported during the revolutionary days of 1848: "France has there, on the banks of the Danube, an inevitable clientele . . . which tries every day to assimilate her language, her legislation, her literature and even her most futile fashions" (Seton-Watson [1934] 1963, 139-40). In Iasi, in 1863, five young Romanians who had returned from the West founded the Junimea (Youth) movement. The movement's chroniclers described the feelings and beliefs of the young reformers, who considered Romanian society to be in its "childhood" but "accepted the need for Rumania to evolve toward a modern civilization on the Western model." Titu Maiorescu and his friends "also discovered in Henry Buckle's 'History of Civilization in England' scientific confirmation of the theories about social change and the course of development which their own country should follow" (Hitchins 1994, 61-64). The Bulgarian national bard and hero Hristo Botev wrote in an article in Zname: "Our unfortunate Bulgarian people have no Parliament, no tribune from which to express their will, their needs and their sufferings" (Botev 1976, 7). The "Warsaw Positivists," a group of Polish reformers, bitterly criticized the situation in their country during the 1860s and 1870s after the failure of a series of national uprisings: "The cultural and economic resources of the Polish nation were as yet underdeveloped to sustain an independent state. In order to take their place among the modern nations of Europe, the Poles must first improve trade and industry . . . build towns and railways, and raise the rate of literacy" (Davies 1986, 170).

Most of the reform-oriented Central and Eastern European elite were convinced that the rise, the "century-long experience," of Northwestern Europe offered a model to follow. They would have to educate themselves, set goals, implement the needed reforms, build the required institutions, and "adopt the norms of European life." Only then could they elevate their nations. As the Albanian Frashëri expressed it:

May the dawn
That will bestow upon us
A great light,
Giving birth to:
Civilization,
Prosperity . . .
Knowledge
And progress,
Goodness
And Humanity
. . . arise,
Never to stray.

There is probably no greater authority on the modern history of central and eastern Europe than Ivan Berend, whose previous work, Decades of Crisis, was hailed by critics as "masterful" and "the broadest synthesis of the modern social, economic, and cultural history of the region that we possess." Now, having brought together and illuminated this region's storm-tossed history in the twentieth century, Berend turns his attention to the equally turbulent period that preceded it. The "long" nineteenth century, extending up to World War I, contained the seeds of developments and crises that continue to haunt the region today.

The book begins with an overview of the main historical trends in the sixteenth to the eighteenth centuries, during which time the region lost momentum and became the periphery, no longer in step with the rising West. It concludes with an account of the persisting authoritarian political structures and the failed modernization that paved the way for social and political revolts. The origins of twentieth-century extremism and its tragedies are plainly visible in this penetrating account.

Ivan T. Berend is Professor of History at the University of California, Los Angeles. Author of Decades of Crisis: Central and Eastern Europe before World War II (California, 1998) and of Central and Eastern Europe 1944-1993 (1996), he has now, with his informal "trilogy," performed the remarkable feat of laying the entire modern history of the region before the English-speaking audience.

“For Berend, history is a whole, and when cultural, economic, social, and political trends are taken together, they distinguish central and east Europeans from the rest of Europe.... Berend, a first-rate economic historian, treats the often neglected economic dimension with special skill.”—Foreign Affairs

“This is an economical and elegant narrative by a distinguished comparative historian of places and times that deserve to be better known.”—Eugen Weber The Key Reporter

"A towering work of scholarship wrapped in a fascinating story."—Dan Danbom Time Out For Entertainment

"I do not think it possible to understand the troubles and instabilities of Central and Eastern Europe today without reading Ivan T.Berend, the finest comparative historian of this region. In History Derailed, he has produced a characteristically lucid and masterly synthesis of its economic, social, political and cultural history in the 'long nineteenth century' which every reader of his much admired study of inter-war Central and Eastern Europe, Decades of Crisis, will need to read, and anyone interested in the continuing problems of the region will want to read."—Eric J. Hobsbawm, Emeritus Professor of Economic and Social History at the University of London and author of many histories including The Age of Extremes: A History of the World, 1914-1991


"This multi-faceted and lavishly illustrated analytical history of Central-East Europe before World War I, written by the world’s foremost scholar of the region, explains how and why the paths of modernization and development diverged so markedly between East and West Europe. Ivan T. Berend’s tour de force of historical interpretation must be essential reading for anyone seeking a true perspective on modern Europe."—Derek H. Aldcroft, University Fellow in the Department of Economic & Social Science, University of Leicester
Read More >

Introduction: The Emerging West as Ideal and Model for the East
1. The Challenge of the Rising West and the Lack of Response in the "Sleeping" East
2. Romanticism and Nationalism in Central and Eastern Europe
3. Uprisings and Reforms: The Struggle for Independence and Modernization
4. Economic Modernization in the Half Century before World War I
5. Social Changes: "Dual" and "Incomplete" Societies
6. The Political System: Democratization versus Authoritarian Nationalism
Epilogue: World War I