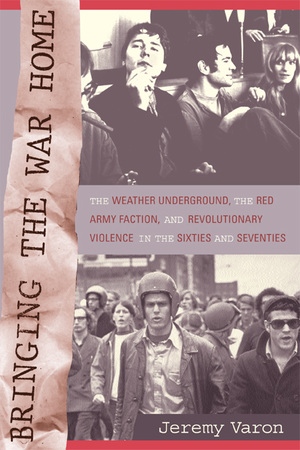 Bringing the War Home The Weather Underground, the Red Army Faction, and Revolutionary Violence in the Sixties and Seventies

In this first comprehensive comparison of left-wing violence in the United States and West Germany, Jeremy Varon focuses on America's Weather Underground and Germany's Red Army Faction to consider how and why young, middle-class radicals in prosperous democratic societies turned to armed struggle in efforts to overthrow their states. Based on a wealth of primary material, ranging from interviews to FBI reports, this book reconstructs the motivation and ideology of violent organizations active during the 1960s and 1970s. Varon conveys the intense passions of the era--the heat of moral purpose, the depth of Utopian longing, the sense of danger and despair, and the exhilaration over temporary triumphs. Varon's compelling interpretation of the logic and limits of dissent in democratic societies provides striking insights into the role of militancy in contemporary protest movements and has wide implications for the United States' current "war on terrorism."

Varon explores Weatherman and RAF's strong similarities and the reasons why radicals in different settings developed a shared set of values, languages, and strategies. Addressing the relationship of historical memory to political action, Varon demonstrates how Germany's fascist past influenced the brutal and escalating nature of the West German conflict in the 60s and 70s, as well as the reasons why left-wing violence dropped sharply in the United States during the 1970s. Bringing the War Home is a fascinating account of why violence develops within social movements, how states can respond to radical dissent and forms of terror, how the rational and irrational can combine in political movements, and finally how moral outrage and militancy can play both constructive and destructive roles in efforts at social change.

Jeremy Varon is Assistant Professor of History at Drew University.

“This book, one of the few scholarly studies in the mix [of the revolutionary Left of the 1970s], deserves a place in every serious university library.”—C. Phelps Choice: Current Reviews For Academic Libraries

“Refreshing, original in its focus and intriguing in its approach. [Varon] should be commended for his sophisticated engagement with his topic and for turning our attention to important questions that will help shape the historical agenda in the foreseeable future.”—Robbie Lieberman Reviews In American History

"Jeremy Varon in Bringing the War Home achieves something very difficult, and very important: he conveys the intense heat of moral purpose and political conviction that drove some radicals to violence, while at the same time he maintains a cool analytic distance that enables him to provide a brilliant and compelling interpretation of the logic and limits of dissent in democratic societies. And his conclusions illuminate pressing issues about the role of militancy in contemporary protest movements."—Jon Wiener, author of Gimme Some Truth: The John Lennon FBI Files


"By looking seriously at the rise of revolutionary violence and the international dimensions of that phenomenon, Jeremy Varon makes an invaluable contribution to our understanding of 'The Sixties.' His book paints a nuanced picture of a period in recent history that in many ways remains an open wound. In so doing, Varon helps us to see the world today more clearly. This is extremely important history-especially for young people."—Sam Green, Director/Producer of "The Weather Underground"

"Jeremy Varon's important and courageous book marks a turning point in the scholarship about the 1960s and their aftermath. With an admirable mixture of distance and engagement, Varon brings to bear the classic questions which European and American historians have applied to questions of politics and violence. Bringing the War Home makes significant contributions to understanding terrible events. It deserves close attention both from scholars and a broad reading public."—Jeffrey Herf, author of Divided Memory: The Nazi Past in the Two Germanys
Read More >