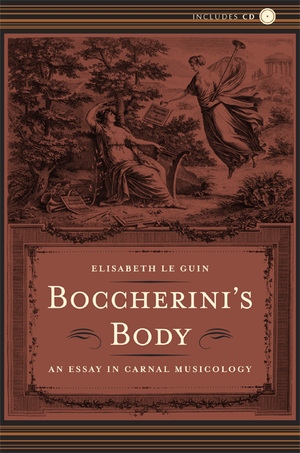 In this elegant study of the works of the undeservedly neglected composer Luigi Boccherini, Elisabeth Le Guin uses knowledge gleaned from her own playing of the cello as the keystone of her original approach to the relationship between music and embodiment. In analyzing the striking qualities of Boccherini's music—its virtuosity, repetitiveness, obsessively nuanced dynamics, delicate sonorities, and rich palette of melancholy affects—Le Guin develops a historicized critical method based on the embodied experience of the performer. In the process, she redefines the temperament of the musical Enlightenment as one characterized by urgent, volatile inquiries into the nature of the self.

Elisabeth Le Guin is Associate Professor of Musicology at the University of California, Los Angeles, and an internationally respected Baroque cellist.

“Including numerous lengthy musical examples and a CD, this is one of the most interesting and enlightening books on music this reviewer has encountered in the last several years.”—S. Edwards, Delgado Community College Choice: Current Reviews For Academic Libraries

“What is exciting here are the strategies that Le Guin employs in this project, strategies radical and thoughtful and that also make for very engaging reading. . . . Succeeds as work of cultural criticism, as a proving ground for new scholarly methodologies, and as a generous piece of writing. “—Early Music America

“Elisabeth Le Guin’s remarkable book is a quantum leap forward. As a well-trained musicologist, a gifted writer, and an effective professional performer on the cello, Le Guin offers not only painstaking historical research into Boccherini’s career as composer and virtuoso performer, but what she calls “cello-and-bow thinking” about the experience of rehearsing and performing his works.”—Stds In Romanticism

"Boccherini’s Body is extremely important, both for its new directions and for its unique combination of interests. It offers a considerable amount of little-known material, and does so daringly and skillfully. Le Guin is a joy to read."—John Butt, author of Playing With History

"Virtuoso writing by a professional performer, this book unites history, biography, cultural studies, and a physically-lived sense of Boccherini's music. It is a work of unusual scholarly imagination; not only does it bring an under-studied body of music to light, but it also introduces new ways to think about performance in historical context."—Mary Hunter, author of the Culture of Opera Buffa in Mozart's Vienna


"Le Guin's book is an adventure in new forms of musical analysis, with a beguilingly passionate, yet rigorous style of philosophical introspection. Her book explodes old analytical paradigms, attending to the technologies and erotics of musical performance in ways some have wanted to do but none have achieved as Le Guin has. This book will catapult Le Guin to stardom."—Martha Feldman, author of City Culture and the Madrigal at Venice
Read More >

1. “Cello-and-Bow Thinking”: The First Movement of Boccherini’s Cello Sonata in E Major, G. 566
2. “As My Works Show Me to Be”: Biographical
3. Gestures and Tableaux
4. Virtuosity, Virtuality, Virtue
5. A Melancholy Anatomy
6. “It Is All Cloth of the Same Piece”: The Early String Quartets
7. The Perfect Listener: A Re-creation