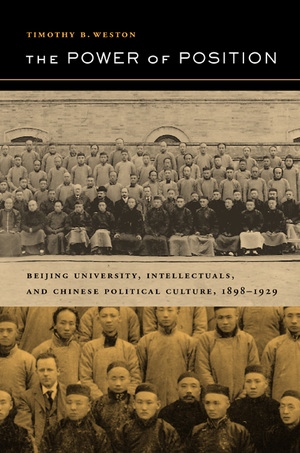 Throughout the twentieth century, Beijing University (or Beida) has been at the center of China's greatest political and cultural upheavals—from the May Fourth Movement of 1919 to the Cultural Revolution of the 1960s to the tragic events in Tiananmen Square in 1989. Why this should be—how Beida's historical importance has come to transcend that of a mere institution of higher learning--is a question at the heart of this book. A study of intellectuals and political culture during the past century's tumultuous early decades, The Power of Position is the first to focus on Beida, China's oldest and best-known national university.

Timothy B. Weston portrays the university as a key locus used by intellectuals to increase their influence in society. Weston analyzes the links between intellectuals' political and cultural commitments and their specific manner of living. He also compares Beijing's intellectual culture with that of the rising metropolis of Shanghai. What emerges is a remarkably nuanced and complex picture of life at China's leading university, especially in the decades leading up to the May Fourth Movement.

Timothy B. Weston is Assistant Professor of History at the University of Colorado at Boulder. He is coeditor of China Beyond the Headlines (2000).

“Weston pushes far beyond such narrow confines in his very impressive study.”—CHOICE

"An invaluable book that fills a yawning gap in our understanding of the political and intellectual life of early-twentieth-century China."—David Strand, author of Rickshaw Beijing

Introduction: Locating Beijing University in History
1. Schools, Politics, and Reform in the Nineteenth Century
2. The Imperial University and Late-Qing Beijing
3. Instability and Redefinition in the Wake of the 1911 Revolution
4. Between the Old Culture and the New
5. The Insistent Pull of Politics
6. Tensions within the May Fourth Movement
7. National University under Siege
Conclusion