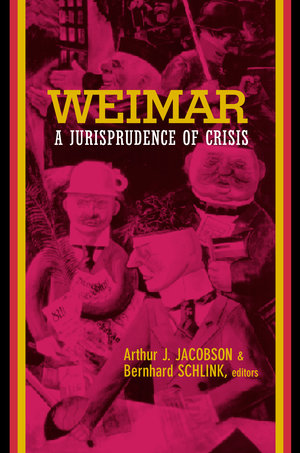 Weimar A Jurisprudence of Crisis

This selection of the major works of constitutional theory during the Weimar period reflects the reactions of legal scholars to a state in permanent crisis, a society in which all bets were off. Yet the Weimar Republic's brief experiment in constitutionalism laid the groundwork for the postwar Federal Republic, and today its lessons can be of use to states throughout the world. Weimar legal theory is a key to understanding the experience of nations turning from traditional, religious, or command-and-control forms of legitimation to the rule of law.

Only two of these authors, Hans Kelsen and Carl Schmitt, have been published to any extent in English, but they and the others whose writings are translated here played key roles in the political and constitutional struggles of the Weimar Republic. Critical introductions to all the theorists and commentaries on their works have been provided by experts from Austria, Canada, Germany, and the United States. In their general introduction, the editors place the Weimar debate in the context of the history and politics of the Weimar Republic and the struggle for constitutionalism in Germany. This critical scrutiny of the Weimar jurisprudence of crisis offers an invaluable overview of the perils and promise of constitutional development in states that lack an entrenched tradition of constitutionalism.

Arthur J. Jacobson is Max Freund Professor of Litigation and Advocacy at the Benjamin N. Cardozo School of Law, Yeshiva University, and coauthor of The Longest Night: Polemics and Perspectives on Election 2000 (California, 2002). Bernhard Schlink is Professor of Public Law and Legal Philosophy at Humboldt Universität zu Berlin. His novel, The Reader (trans. 1999), has won critical acclaim in German and in English.

"An important resource, it includes the most significant and influential texts representative of the political and conceptual diversity of the intellectual approaches of that time. . . . Very significant for contemporary debates about the relationship between state, law, and constitution."—Ulrich Karl Preuss, Freie Universität Berlin

Introduction. Constitutional Crisis: The German and the American Experience, by Arthur J. Jacobson and Bernhard Schlink

Prologue. The Shattering of Methods in Late Wilhelmine Germany
Introduction, by Stefan Korioth
On Legal Theory and Sociology (1911), by Max Weber
Constitutional Amendment and Constitutional Transformation (1906), by Georg Jellinek
On the Borders between Legal and Sociological Method (1911), by Hans Kelsen
Statute and Judgment (1912), by Carl Schmitt

2. Hugo Preuss
Introduction, by Christoph Schoenberger
The Significance of the Democratic Republic for the Idea of Social Justice (1925), by Hugo Preuss