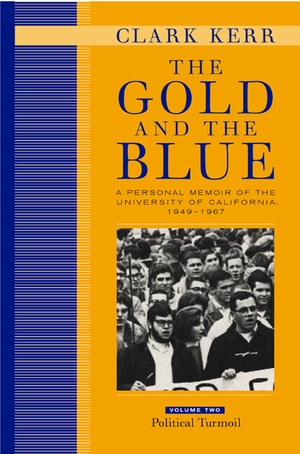 The Gold and the Blue, Volume Two A Personal Memoir of the University of California, 1949–1967, Political Turmoil

The Los Angeles Times called the first volume of The Gold and the Blue "a major contribution to our understanding of American research universities." This second of two volumes continues the story of one of the last century's most influential figures in higher education. A leading visionary, architect, leader, and fighter for the University of California, Clark Kerr was chancellor of the Berkeley campus from 1952 to 1958 and president of the university from 1958 to 1967. He saw the university through its golden years—a time of both great advancement and great conflict. This absorbing memoir is an intriguing insider's account of how the University of California rose to the peak of scientific and scholarly stature and how, under Kerr's unique leadership, it evolved into the institution it is today.

In Volume II: Political Turmoil, Kerr turns to the external and political environment of the 1950s and 1960s, contrasting the meteoric rise of the University of California to the highest pinnacle of academic achievement with its troubled political context. He describes his attempts to steer a middle course between attacks from the political Right and Left and discusses the continuing attacks on the university, and on him personally, by the state Un-American Activities Committee. He provides a unique point of view of the Free Speech Movement on the Berkeley campus in the fall of 1964. He also details the events of January 1967, when he was dismissed as president of the university by the Board of Regents.

“For those seeking the real man behind the warring reputations, the late Clark Kerr completed a memoir that recalls not just the view from the UC president’s office of the biggest upheavals in the university’s history...but also the personal anguish, philosophy and dreams of this Quaker pacifist and son of a Pennsylvania farmer who found himself at the famous university’s helm during its greatest trials. Kerr is by turn self-critical and free of false modesty in describing his accomplishments and accolades, while he settles old scores and forgives old enemies.”—San Francisco Chronicle

PART III. THE EMERGENCE OF YOUTH UPRISINGS
4. Youth Uprisings around the World
5. The Development of Student Political Movements in the United States

PART IV. STUDENT CONFLICT ACCELERATES AT BERKELEY
6. The Fatal Attractions of the Berkeley Campus
7. The Sproul Directives
8. The Issue of Political Advocacy on Campus
9. Things Start to Fall Apart

PART V. BERKELEY, FALL 1964—THE FSM UPRISING
10. The Lighted Match
11. The Conflagration
12. The Center Holds and Puts Out the Flames