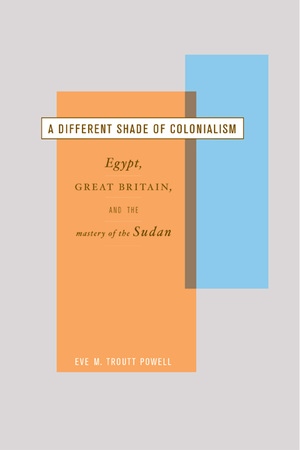 A Different Shade of Colonialism Egypt, Great Britain, and the Mastery of the Sudan

This incisive study adds a new dimension to discussions of Egypt's nationalist response to the phenomenon of colonialism as well as to discussions of colonialism and nationalism in general. Eve M. Troutt Powell challenges many accepted tenets of the binary relationship between European empires and non-European colonies by examining the triangle of colonialism marked by Great Britain, Egypt, and the Sudan. She demonstrates how central the issue of the Sudan was to Egyptian nationalism and highlights the deep ambivalence in Egyptian attitudes toward empire and the resulting ambiguities and paradoxes that were an essential component of the nationalist movement. A Different Shade of Colonialism enriches our understanding of nineteenth- and twentieth-century Egyptian attitudes toward slavery and race and expands our perspective of the "colonized colonizer."

Eve M. Troutt Powell is Assistant Professor of History at the University of Georgia.

“An absorbing, important book about the triangular relationship between Britain, Egypt, and the Sudan and the ambiguous role Egypt played in that relationship as both colonized and colonizer. . . . This book is very thought provoking and should stimulate reconsideration of the ambiguous role of colonial intermediaries.”—Intl Journal Of Middle East Stds (Ijmes)

“Presents a refreshing contribution to the growing but underdeveloped field of slavery in Islamic societies.”—Mona L. Russell African Stds Review

"This book adds a new dimension to the ongoing discussions of Egypt's nationalist response to colonialism—and to discussions of colonialism and nationalism more generally. Dr. Powell demonstrates cogently how central the issue of the Sudan was to Egyptian nationalism right from the beginning—an aspect of the situation to which historians have given far too little attention. That colonized Egypt was itself a colonizer is a fact whose pervasive, complex role in the Egyptian response to the British presence has not been adequately appreciated. This study also enriches our understanding of 19th and 20th-century Egyptian attitudes toward slavery and toward race, showing how Egyptians really thought about these matters below the level of policy and administration. The findings in this area are particularly illuminating and important; although they will certainly be controversial in some quarters, they are firmly grounded in contemporary materials that are vivid, eloquent, and fascinating. As a contribution to social history, with important implications for political history as well, this book is most impressive."—Everett K.Rowson, Associate Professor of Arabic and Islamic Studies, University of Pennsylvania

Introduction
1. Journeys from the Fantastic to the Colonial
2. Black Servants and Saviors: The Domestic Empire of Egypt
3. The Lived Experience of Contradiction: Ibrahm Fawz’s Narrative of the Sudan
4. The Tools of the Master: Slavery, Family, and the Unity of the Nile Valley
5. Egyptians in Blackface: Revolution and Popular Culture, World War 1 to 1925
Conclusion