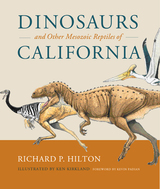 Dinosaurs and Other Mesozoic Reptiles of California

One of the most geologically complex and diverse states, California spent much of the age of dinosaurs under water. While most of the fossils found in the state are those of reptiles that lived in the sea (thalattosaurs, ichthyosaurs, mosasaurs, plesiosaurs, and turtles), some are those of birds and pterosaurs that soared above it. Other fossils come from terrestrial animals that died and were washed into the ocean. These include turtles, crocodiles, lizards, and dinosaurs such as armored ankylosaurs, duck-billed hadrosaurs, and a variety of carnivorous dinosaurs.

Richard Hilton is the first to tell the unsung story of the dinosaurs and reptiles of land, sea, and sky that lived in California and Baja California during the Mesozoic era (245 million-65 million years ago), in addition to the history of their discovery. Vibrantly illustrated with more than three hundred photographs, paintings, and drawings, this book provides geological and environmental details, describes the significance of the major fossils, and chronicles the adventures involved in the discovery, preparation, and publishing of the finds.

Hilton also includes accounts of the scientists, teachers, students, ranchers, and weekend fossil hunters who endured (and continue to endure) harsh weather, fires, wild animals, and the usual challenges of fieldwork to collect fossil remains and make major discoveries. These enthusiasts managed to safeguard an abundance of fossil resources, some of which would otherwise have been destroyed by quarrying, paving, and housing developments. Dinosaurs and Other Mesozoic Reptiles of California takes this legacy one step further by documenting information about the fossils and their finders in accessible prose and vivid artistic renderings, creating a valuable contribution to our understanding of California’s prehistoric past.

Richard P. Hilton is Professor of Geology at Sierra College in Rocklin, California.

"A phenomenal book. . . . [I]t's bound to be the definitive book on this topic for decades to come. It's hard to envision anyone doing a better job."—Ray Troll California Coast & Ocean

"Other books describe the same types of dinosaurs and reptiles, but this one is unique in creating a complete picture of the Mesozoic era in California"—Kimberly Megginson Library Journal

"This handsome volume will delight any dinosaurophile."—Publishers Weekly

"Vividly described and illustrated, this engaging saga of the California 'bone rush' is authoritative and accessible to expert or amateur paleontologists and the general reader."—Michael Novacek, American Museum of Natural History, author of Time Traveler

"California has long been recognized for its very significant fossils of Mesozoic marine reptiles. Not as well known are the other Mesozoic reptilian fossils. Richard Hilton recreates the Mesozoic history of California, and the animals that lived there—on both land and sea. The book provides a much needed history of fossil exploration in the state, from the earliest work by J.C. Merriam and Annie Alexander, up to the present day. It profiles the work of many of the dedicated and enthusiastic amateurs who have made such an important contribution to this work."—Elizabeth L. Nicholls, Curator of Marine Reptiles, Royal Tyrrell Museum


"From a restricted but significant fossil record of Mesozoic reptiles, Hilton reconstructs the fascinating ecosystem that thrived on the ancient West Coast and provides a captivating narrative of its discoverers. This book is a must for anyone interested in the deep history of California and its adjacent regions."—Luis M. Chiappe, coeditor of Mesozoic Birds: Above the Heads of Dinosaurs
Read More >

Part I California During the Age of Reptiles
1. Geologic History
2. The Dinosaurs
3. The Flying Reptiles
4. The Marine Reptiles