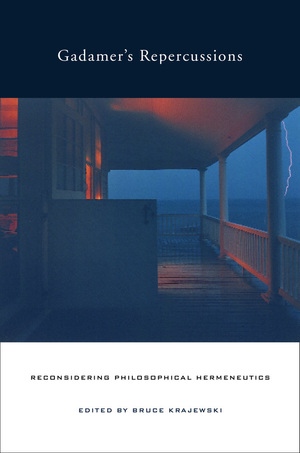 Certainly one of the key German philosophers of the twentieth century, Hans-Georg Gadamer also influenced the study of literature, art, music, sacred and legal texts, and medicine. Indeed, while much attention has been focused on Gadamer's writings about ancient Greek and modern German philosophy, the relevance of his work for other disciplines is only now beginning to be properly considered and understood. In an effort to address this slant, this volume brings together many prominent scholars to assess, re-evaluate, and question Hans-Georg Gadamer's works, as well as his place in intellectual history. The book includes a recent essay by Gadamer on "the task of hermeneutics," as well as essays by distinguished contributors including Jürgen Habermas, Richard Rorty, Gerald Bruns, Georgia Warnke, and many others.

The contributors situate Gadamer's views in surprising ways and show that his writings speak to a range of contemporary debates—from constitutional questions to issues of modern art. A controversial final section attempts to uncover and clarify Gadamer's history in relation to National Socialism. More an investigation and questioning than a celebration of this venerable and profoundly influential philosopher, this collection will become a catalyst for any future rethinking of philosophical hermeneutics, as well as a significant starting place for rereading and reviewing Hans-Georg Gadamer.

Bruce Krajewski is Professor and Chair of the Department of Literature and Philosophy at Georgia Southern University. He is the author, with Richard Heinemann, of Gadamer on Celan: "Who Am I and Who Are You?" and Other Essays (1997), Traveling with Hermes: Hermeneutics and Rhetoric (1992), and, with Doug Parker, A Brefe Dialoge bitwene a Christen Father and his stobborne Sonne: The First Protestant Catechism Published in English (1999).

"Gadamer’s Repercussions is a terrific collection of essays. While Gadamer is not the most precise of philosophers, he turns out, in this book at least, to be among the most generative. The essays prove that Gadamer’s idealizing of dialogue can actually be put in practice by careful attention to the frameworks he addresses. I was most impressed by the essays that situate his ethics, his aesthetics, his relation to romanticism, his understanding of the relation of law and morality, his engagements with Fascism, and several aspects of his vexed relationship with postmodern thinking, especially on the possibility of dialogue."—Charles Altieri, author of The Particulars of Rapture

"Gadamer is well known for his insistence that every reading is a new reading and every act of understanding a pathway to new understanding. Krajewski’s carefully assembled volume applies these maxims to the understanding of Gadamer himself. By focusing on his intellectual and political background as well as his long-range influence and repercussions, the book opens new vistas for assessing one of the philosophical giants of the twentieth century."—Fred Dallmayr, author of Dialogue Among Civilizations

Acknowledgments
Preface
Introduction. From Word to Concept: The Task of Hermeneutics as Philosophy
Hans-Georg Gadamer, translated by Richard E. Palmer

I. GADAMER'S INFLUENCE
1. After Historicism, Is Metaphysics Still Possible? On Hans-Georg Gadamer’s 100th Birthday
Jürgen Habermas, translated by Paul Malone
2. Being That Can Be Understood Is Language
Richard Rorty
3. On the Coherence of Hermeneutics and Ethics: An Essay on Gadamer and Levinas
Gerald L. Bruns
4. Gadamer and Romanticism
Andrew Bowie
5. Literature, Law, and Morality
Georgia Warnke
6. A Critique of Gadamer’s Aesthetics
Michael Kelly

II. GADAMER AND DIALOGUE
7. On Dialogue: To Its Cultured Despisers
Donald G. Marshall
8. Gadamer’s Philosophy of Dialogue and Its Relation to the Postmodernism of Nietzsche, Heidegger, Derrida, and Strauss
Ronald Beiner
9. Meaningless Hermeneutics?
Joel Weinsheimer

III. GADAMER IN QUESTION
10. Radio Nietzsche, or, How to Fall Short of Philosophy
Geoff Waite
11. The Art of Allusion: Hans-Georg Gadamer’s Philosophical Interventions under National Socialism
Teresa Orozco, translated by Jason Gaiger
12. On the Politics of Gadamerian Hermeneutics: A Response to Orozco and Waite
Catherine H. Zuckert
13. The Protection of the Philosophical Form: Response to Zuckert
Teresa Orozco, translated by Paul Malone
14. Salutations: Response to Zuckert
Geoff Waite