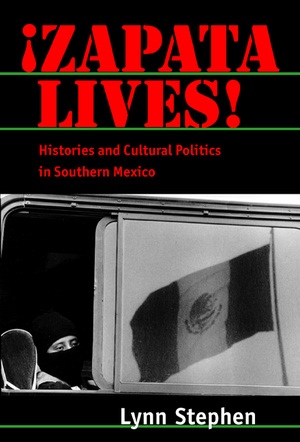 This richly detailed study chronicles recent political events in southern Mexico, up to and including the July 2000 election of Vicente Fox. Lynn Stephen focuses on the meaning that Emiliano Zapata, the great symbol of land reform and human rights, has had and now has for rural Mexicans. Stephen documents the rise of the Zapatista rebellion in Chiapas and shows how this rebellion was understood in other parts of Mexico, particularly in Oaxaca, giving a vivid sense of rural life in southern Mexico. Illuminating the cultural dimensions of these political events, she shows how indigenous Mexicans and others fashioned their own responses to neoliberal economic policy, which ended land reform, encouraged privatization, and has resulted in increasing socioeconomic stratification in Mexico.

Mixing original ethnographic material drawn from years of fieldwork in Mexico with historical material from a variety of sources, Stephen shows how activists have appropriated symbols of the revolution to build the contemporary political movement. Her wide-ranging narrative touches on the history of land tenure, racism, gender issues in the Zapatista movement, local political culture, the Zapatista uprising of the 1990s and its aftermath, and more. A significant addition to our knowledge of social change in contemporary Mexico, Zapata Lives! also offers readers a model for engaged, activist anthropology.

Lynn Stephen is Professor of Anthropology at the University of Oregon. She is author of Women and Social Movements in Latin America: Power from Below (1997) and Zapotec Women (1991), among other books.

Zapata Lives! is the first scholarly study to examine contemporary Mexican Zapatismo comparatively, with an eye to regionally varying histories of peasant and indigenous relations to the national state. Analyzing the mosaic of experiences of agrarian reform, in the heartland of the Zapatista rebellion in eastern Chiapas and in central Oaxaca, Stephen clarifies how Zapata arose, and lives on, as a powerful symbol for the equity and social justice that men and women of Mexico's rural south demand of their government.—George Collier, author of Basta! Land and the Zapatista Rebellion in Chiapas

Lynn Stephen's new book on Zapatismo is her best work to date and will win her great acclaim. It is a fascinating and highly accessible study of the interplay of state ideology, political economy, and local responses in Oaxaca and Chiapas, Mexico. Many scholars and students have been waiting for a richer contextualization of the Zapatista movement, and Stephen offers very effective tactics to frame such a study.—Kay Warren, author of Indigenous Movements and Their Critics

Zapata Lives! is a testimony to the struggles and tentative hopes of indigenous populations in Mexico. It is also a testimony to the remarkable synergy that emerges from conjoining the ethnographic encounter with political events in their contested historical contexts. Articulate and compassionate herself, Stephen introduces her informants as the most articulate exponents of their own views and urges us to share their passions and perplexities. In short, this is an academically rich work that also engages the sensitivities and imagination of the reader.—Michael Herzfeld, author of Cultural Intimacy


Ethnographic in method and encyclopedic in scope, this morally engaged book is indispensable to understanding historic transformations occurring in contemporary Mexico. Through comparative fieldwork in Chiapas and Oaxaca, Stephen reveals local impacts of and responses to the ongoing Zapatista rebellion, recent changes in Mexico's agrarian law, and the imposition of the North American Free Trade Agreement.—Michael Kearney, University of California, Riverside

The Chiapas rebellion inspired widespread sympathy in the Mexican countryside, yet few followed the same path. Zapata Lives! unravels this puzzle by comparing agrarian political identities in both insurgent and quiescent rural communities. Stephen deftly explains local identity formation through the lenses of ethnicity, gender and class, as framed by diverse historical legacies of state-community relations. In the process, she breaks important ground in engaged anthropology, redefining what it means to be in the field.—Jonathan Fox, University of California, Santa Cruz
Read More >

Contents
List of Maps, Illustrations, and Tables
Acknowledgments
Acronyms and Abbreviations
Preface
Part I. The Political and Historical Contexts of Zapatismo
1. Introduction: The "Fields" of Anthropology, Human Rights, and Contemporary Zapatismo
2. Government Construction and Reappropriation of Emiliano Zapata
3. Ethnic and Racial Categories in Mexican History
Part II. Zapatismo in Eastern Chiapas
4. The Historical Roots of Indigenous Struggle in Chiapas
5. The New Zapatismo in the Lacandon Jungle
6. Zapata Vive! Lacandon Zapatismo and Its Translation to Larger Mexico
7. Conversations with Zapatistas: The Revolutionary Law of Women and Military Occupation
Part III. New and Old Zapatismo in Oaxaca
8. The Historical Roots of Land Conflict and Organizing in Oaxaca
9. The Story of Santa María del Tule: Zapata, Cárdenas, and "Good Guy" Officials
10. The Formation of the Ejido of Unión Zapata
11. Contradictions of Zapatismo in Rural Oaxaca
Conclusion: Reclaiming the Mexican Nation for the Poor and the Indigenous South
Notes
References
Index