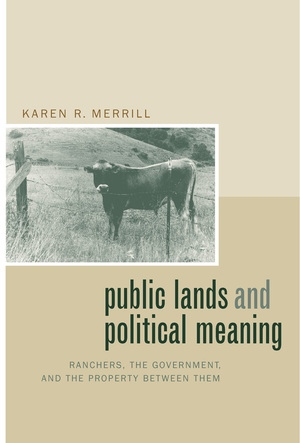 Public Lands and Political Meaning Ranchers, the Government, and the Property between Them

The history of the American West is a history of struggles over land, and none has inspired so much passion and misunderstanding as the conflict between ranchers and the federal government over public grazing lands. Drawing upon neglected sources from organized ranchers, this is the first book to provide a historically based explanation for why the relationship between ranchers and the federal government became so embattled long before modern environmentalists became involved in the issue. Reconstructing the increasingly contested interpretations of the meaning of public land administration, Public Lands and Political Meaning traces the history of the political dynamics between ranchers and federal land agencies, giving us a new look at the relations of power that made the modern West.

Although a majority of organized ranchers supported government control of the range at the turn of the century, by midcentury these same organizations often used a virulently antifederal discourse that fueled many a political fight in Washington and that still runs deep in American politics today. In analyzing this shift, Merrill shows how profoundly people's ideas about property wove their way into the political language of the debates surrounding public range policy. As she unravels the meaning of this language, Merrill demonstrates that different ideas about property played a crucial role in perpetuating antagonism on both sides of the fence.

In addition to illuminating the origins of the "sagebrush rebellions" in the American West, this book also persuasively argues that political historians must pay more attention to public land management issues as a way of understanding tensions in American state-building.

Karen R. Merrill is Assistant Professor of History at Williams College and editor of The Modern Worlds of Business and Industry: Cultures, Technology, Labor (1998).

“Read Merriill’s work for a clearer picture of the history behind the scenes.”—Carl Hallberg Annals Of Wyoming

"In recovering the process by which American ranchers achieved their political coming-of-age, Karen Merrill's Public Lands and Political Meaning breaks new ground. Here the history of ranchlands policy, long oversimplified and even truncated by western and public lands historians, is presented as a complex, nuanced, and interdisciplinary narrative. Merrill forces us to see how inescapable is the reach of the past, as the political choices ranchers and administrators fought over nearly a century ago set the stage for the policy battles that rage today over western grazing rights. Anyone who cares about the fate of our nation's beleaguered public lands should read this book."—Victoria Saker Woeste, author of The Farmer's Benevolent Trust: Law and Agricultural Cooperation in Industrial America, 1865-1945

"Karen Merrill's Public Lands and Political Meaning provides a new and refreshing perspective on the ongoing struggles for control over the public's vast acreage in the American West. Merrill's pathbreaking and lucid analysis reveals how the entangling of private property with public lands has given to ranchers, government agents, and now environmentalists a set of powerful but ultimately limited tools to reckon their relations to one another and to the land. With this book, the political history of the public domain moves back to the center of American history."—Louis S. Warren, author of The Hunter's Game: Poachers and Conservationists in Twentieth-Century America


"In Public Lands and Political Meaning, Karen R. Merrill offers a provocative and original analysis of the roots of recent controversies involving ranchers, environmentalists, and government officials in the West. She shows how a seemingly simple question—who owns "the public domain"?—has generated intense and far-reaching debate throughout the twentieth century. Her account of the contested meaning of the vast federal estate sheds new light on the history of the State. This is an important book."—Adam Rome, author of The Bulldozer in the Countryside and editor of Environmental History
Read More >

List of Illustrations
Preface
Introduction
1. Policing and Policymaking on the Range
2. The Properties of the Homebuilder
3. The Lessons of the Market
4. The Sovereignty of the State, or the States?
5. The Taylor Grazing Act and the "Vast National Estate"
6. Property Rights and Political Meaning
Epilogue
Notes
Bibliographic Essay
Index