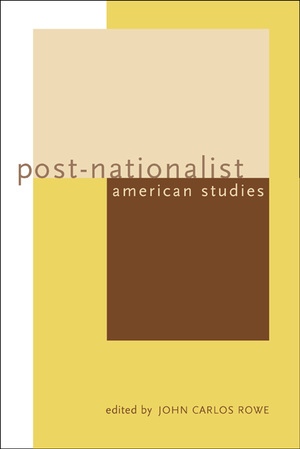 Post-Nationalist American Studies seeks to revise the cultural nationalism and celebratory American exceptionalism that tended to dominate American Studies in the Cold War era. The goal of the book's contributors is a less insular, more trans-national, comparative approach to American Studies, one that questions dominant American myths rather than canonizes them. Articulating new ways to think about American Studies, these essays demonstrate how diverse the field has become.

Contributors are concerned with cross-cultural communication, race and gender, global and local identities, and the complex tensions between symbolic and political economies. Their essays explore, among other topics, the construction of "foreign" peoples and cultures; the notion of borders—territorial, racial, economic, and sexual; the "multilingual reality" of the United States; the place of the Mexican-American War in U.S. history; and the significance of Tiger Woods in today's global market of consumption.

Together, the essays propose a renewed vision of the United States' role in the world and how American Studies scholarship can address that vision. Each contributor includes a sample syllabus showing how the issues discussed in individual essays can be brought into the classroom.

John Carlos Rowe is Professor of English and Comparative Literature at the University of California, Irvine. Among his many published works are The Other Henry James (1998) and At Emerson's Tomb: The Politics of Classic American Literature (1997), and, as editor, Culture and the Problem of the Disciplines (1998). His most recent book is Literary Culture and U.S. Imperialism: From the Revolution to World War II (2000).

"From globalization to gender studies to the selling of Tiger Woods as multicultural icon, these provocative and reader-friendly essays provide a new overview of the landscape of cultural studies today as well as--in a unique feature of the book--a blueprint for developing courses out of the issues discussed." —Gerald Graff, Dean of Curriculum and Instruction, University of Illinois at Chicago

"Post-Nationalist American Studies is a strikingly useful book. It offers a seeming contradition-'American' yet 'Post-Nationalist'-as a remarkably generative theoretical standpoint for a series of sharp and challenging essays. All of these provide vivid readings of an unusually wide range of texts and the contributors give us real syllabi for real classes in which theory, close reading, and historical specificity have been put into the kind of classroom practice which is helping reshape not just an academic field of study but the understanding of what 'American' might mean."—Paul Lauter, Smith Professor of Literature, Trinity College