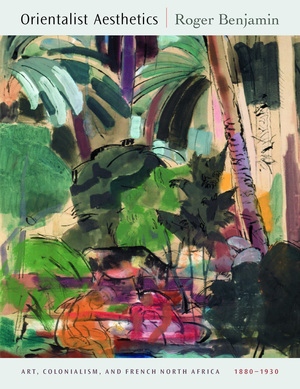 Lavishly illustrated with exotic images ranging from Renoir's forgotten Algerian oeuvre to the abstract vision of Matisse's Morocco and beyond, this book is the first history of Orientalist art during the period of high modernism. Roger Benjamin, drawing on a decade of research in untapped archives, introduces many unfamiliar paintings, posters, miniatures, and panoramas and discovers an art movement closely bound to French colonial expansion. Orientalist Aesthetics approaches the visual culture of exoticism by ranging across the decorative arts, colonial museums, traveling scholarships, and art criticism in the Salons of Paris and Algiers. Benjamin's rediscovery of the important Society of French Orientalist Painters provides a critical context for understanding a lush body of work, including that of indigenous Algerian artists never before discussed in English.

The painter-critic Eugène Fromentin tackled the unfamiliar atmospheric conditions of the desert, Etienne Dinet sought a more truthful mode of ethnographic painting by converting to Islam, and Mohammed Racim melded the Persian miniature with Western perspective. Benjamin considers armchair Orientalists concocting dreams from studio bric-à-brac, naturalists who spent years living in the oases of the Sahara, and Fauve and Cubist travelers who transposed the discoveries of the Parisian Salons to create decors of indigenous figures and tropical plants. The network that linked these artists with writers and museum curators was influenced by a complex web of tourism, rapid travel across the Mediterranean, and the march of modernity into a colonized culture. Orientalist Aesthetics shows how colonial policy affected aesthetics, how Europeans visualized cultural difference, and how indigenous artists in turn manipulated Western visual languages.

Roger Benjamin has been appointed Power Professor of Art History and Visual Culture and Director of the Power Institute at the University of Sydney. He is author of Orientalism: Delacroix to Klee (1997), Matisse's "Notes of a Painter": Criticism, Theory, and Context (1987), the forthcoming title, Renoir and Algeria, and winner of the Arthur Kingsley Porter Prize of the CAA for his article "The Decorative Landscape, Fauvism, and the Arabesque of Observation" (1993).

“A defining work of cultural history that examines the historical and social particularities behind the blanket term Orientalist art.”—John Zarobell, Philadelphia Museum of Art African Studies

“The most substantial new book in this field of colonialist study...the most comprehensive examination of Orientalist imagery in print.”—Gabriel Weisberg Apollo: The Int'l Art & Antique Magazine

“Every once in awhile a book comes along that gladdens the heart and quickens the pulse. This...is one such book. Roger Benjamin has made a major contribution to scholarship...This remarkable volume takes the reader on a long journey linking various oases of knowledge.”—Ted Gott Art Monthly Australia

“This study investigates how North African artists were influenced by French artists -- and vice versa.... This book is a major contribution to the study of Orientalism and, having taken the topic beyond the range of the customary academic concerns, it opens up exciting and new avenues for further research.”—Art Newspaper

“This book is a major contribution to the study of Orientalism.”—Nebahat Avciogin Art Newspaper

"Roger Benjamin's Orientalist Aesthetics dramatically enhances our understanding of French colonial visual culture during the period of colonialism's greatest ambitions. It is a richly nuanced book, about the densely imbalanced connections between France and North Africa, full of fascinating images and elegant analysis, exemplary in its wide-ranging attention to art works, popular spectacle, institutions, scholarship, and the contradictory workings of colonial culture and power. This book should be read not only by art historians and North Africa specialists, but by anyone concerned with colonial cultures and their legacies."—Nicholas Thomas, author of Possessions: Indigenous Art/Colonial Culture

"Orientalist Aesthetics represents an impressive feat of research and a tale heretofore untold. Especially fascinating is Roger Benjamin's choice not simply to interrogate the institutional history of French Orientalist painting, but to consider more broadly the French management of indigenous arts as well as some of the Algerian artists who fashioned careers during this period. This is an original and responsible reconstruction of a significant and complex history."—Darcy Grimaldo Grigsby, author of Extremities: Painting Empire in Post-Revolutionary France

"At once broad and minutious, Orientalist Aesthetics treats the major institutions and actors who brought about the encyclopedic Orientalist movement. Roger Benjamin’s work has the potential to significantly advance the dialogue between Europe and the United States on current problems in post-colonial studies."—François Pouillon, author of Les deux vies d’Étienne Dinet, peintre en Islam: L’Algérie et l’héritage colonial

"Roger Benjamin's engrossing and painstakingly researched book breaks new ground in the study of Orientalism. The fifty years of the book's novel compass have been virtually untouched by previous studies. Benjamin's subtle understanding of the complexities of the colonial encounter sets a very high standard of theoretical analysis. Orientalist Aesthetics covers a broad terrain of individual artists (from the modernists Renoir and Matisse to the barely known Algerians Mammeri and Racim), art criticism, and institutions. The book tells an altogether fascinating story, and the author's detailed historical knowledge, passion, good sense, and acuity are evident on every page."—Hollis Clayson, author of Paris in Despair: Art and Everyday Life under Siege (1870-71)

"Benjamin establishes meaningful parallels between painting and other artistic (as well as literary) productions, including photography and the decorative arts. He astutely analyzes the effect of colonial policies on the preservation and ‘development’ of indigenous arts and crafts. All these elements are examined within the ever-shifting parameters of French colonial policies in North Africa."—Zeynep Çelik, author of Urban Forms and Colonial Confrontations: Algiers under French Rule