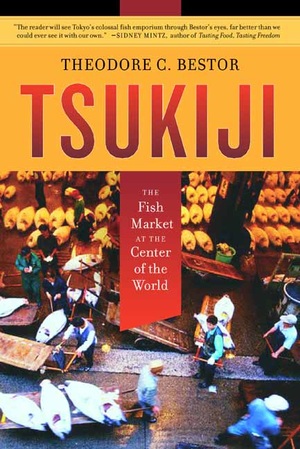 Tsukiji The Fish Market at the Center of the World

Located only blocks from Tokyo's glittering Ginza, Tsukiji—the world's largest marketplace for seafood—is a prominent landmark, well known but little understood by most Tokyoites: a supplier for countless fishmongers and sushi chefs, and a popular and fascinating destination for foreign tourists. Early every morning, the worlds of hi-tech and pre-tech trade noisily converge as tens of thousands of tons of seafood from every ocean of the world quickly change hands in Tsukiji's auctions and in the marketplace's hundreds of tiny stalls. In this absorbing firsthand study, Theodore C. Bestor—who has spent a dozen years doing fieldwork at fish markets and fishing ports in Japan, North America, Korea, and Europe—explains the complex social institutions that organize Tsukiji's auctions and the supply lines leading to and from them and illuminates trends of Japan's economic growth, changes in distribution and consumption, and the increasing globalization of the seafood trade. As he brings to life the sights and sounds of the marketplace, he reveals Tsukiji's rich internal culture, its place in Japanese cuisine, and the mercantile traditions that have shaped the marketplace since the early seventeenth century.

Theodore C. Bestor is Professor of Anthropology and Japanese Studies at Harvard University and past President of the American Anthropological Association's East Asian Studies Section and the Society for Urban Anthropology. His publications include Neighborhood Tokyo (1989), Doing Fieldwork in Japan (coeditor, 2003), and "How Sushi Went Global" in Foreign Policy (2000).

“A remarkable voyage through a place, in time and space. . . . Bestor’s book is the ultimate study of Tsukiji. . . . A monument.”—American Journal Of Sociology / AJS

"More than just a fascinating read about the world's biggest fish market. . . . Based on 12 years of painstaking fieldwork and other research, Tsukiji brims with an impressive collection of insights."—Velisarios Kattoulas Far Eastern Economic Review

"A superb study about the people, pandemonium and relationships that define the Tsukiji fish marketplace. . . . After reading this wonderful and mouth-watering book, going out for sushi will never be the same."—Jeff Kingston Japan Times

“Bestor seems to know better than anyone in the world about Tsukiji, the world’s largest fish market in size...Bestor’s book conveys the pre-dawn excitement of the market...[he] is as thorough and helpful a guide on the printed page as he is in person. Do not go to Tsukiji without reading this book. If you can’t go, read this book.”—Sylvia Carter Newsday

“A range of readers, from regional specialists to tourists, will be interested in this well-rounded study that displays the merits and skills of ethnography; Bestor even provides an appendix telling visitors how to visit and what to see in this fascinating place. . . . One of the finest ethnographic studies that we have of a modern market. . . . If you visit Japan, take this book for its insights into the culture, a Tokyo neighborhood, and the local diet.—Stephen Gudeman Science (AAAS)

“A strong contender for the most interesting book on Japan published in 2004, Bestor’s brilliantly original study of Tokyo’s main fish market is much more than the sum of its fascinating parts. This is anthropology and Japanology at its liveliest and most human. . . . An absolute gem of a book that says more about Jpan that a whole shelf of single-discipline books.”—Colin Donald The Daily Yomiuri

“Fortunately for us stayabeds, Tsukiji has now found its definitive chronicler in Theodore C. Bestor, professor of anthropology and Japanese studies at Harvard. . . bearded, burly and just the man for a heroic task by which, due to his painstaking scholarship, we can get an understanding of Tsukiji, and of modern Japan, without losing a single night’s sleep. . . . Bestor’s landmark work will not need to be repeated for a generation, perhaps ever, so much has he discovered lurking unsuspected behind the price of fish.”—Murray Sayle Times Literary Supplement (TLS)

"Bestor's vivid and meticulous study of Tokyo's seafood market is at once perhaps the best description we have of a modern, large-scale commodity bazaar, an important contribution to comparative economics, and a powerful analysis of the everyday workings of Japanese culture. As a portrait of a master institution in a complex society, Tsukiji represents a major advance in the anthropological description of contemporary life."—Clifford Geertz, author of The Interpretation of Cultures

"This is, quite simply, a masterpiece of ethnography and a jewel of a book. It will prove immediately popular and influential."—William W. Kelly, Professor of Anthropology, Yale University

"Bestor's rich portrait of Tsukiji is set within the larger frame of Tokyo's urban history, helping us see clearly the forces which, over time, resulted in the creation of the world's greatest seafood market. An impressive amount of ethnographic fieldwork turns his fascination with Tsukiji into a first-rate piece of anthropological analysis. The reader will see Tokyo's colossal fish emporium through Bestor's eyes, far better than we could ever see it with our own."—Sidney Mintz, author of Sweetness and Power and Tasting Food, Tasting Freedom

"This study is a fine example of how key local institutions both drive and reflect larger national and global processes. In showing us the global reach of a major seafood market in Japan, Bestor is able to bring the best practices of ethnography to the abstractions of the economy, thus deepening our sense of how money, commodities, risk and drudgery meet to produce a specific - and brilliantly evoked - cultural economy. This is a rare book, full of treats for both the specialist and the general reader. "—Arjun Appadurai, author of Modernity at Large