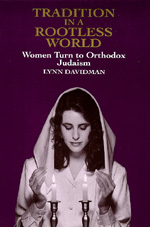 Tradition in a Rootless World Women Turn to Orthodox Judaism

The past two decades in the United States have seen an immense liberalization and expansion of women's roles in society. Recently, however, some women have turned away from the myriad, complex choices presented by modern life and chosen instead a Jewish orthodox tradition that sets strict and rigid guidelines for women to follow.

Lynn Davidman followed the conversion to Orthodoxy of a group of young, secular Jewish women to gain insight into their motives. Living first with a Hasidic community in St. Paul, Minnesota, and then joining an Orthodox synagogue on the upper west side of Manhattan, Davidman pieced together a picture of disparate lives and personal dilemmas. As a participant observer in their religious resocialization and in interviews and conversations with over one hundred women, Davidman also sought a new perspective on the religious institutions that reach out to these women and usher them into the community of Orthodox Judaism.

Through vivid and detailed personal portraits, Tradition in a Rootless World explores women's place not only in religious institutions but in contemporary society as a whole. It is a perceptive contribution that unites the study of religion, sociology, and women's studies.

"[Davidman's] rich ethnographic observations and lucid prose illuminate two of the more important aspects of modern religion generally: the changing role of women and the resurgence of traditional faith."—Robert Wuthnow, author of Meaning and Moral Order

1. A Day in the Life of Two Jewish Women
2. Women, Judaism, and Modernity
3· A Journey into Two Jewish Communities
4· Order, Belonging, and Identity
5· Women into Wives and Mothers
6. Teachings on Jewish Religious Observance
7· The Dynamics of Conversion
8. On Women and Religious Traditions in Modern
U.S. Society