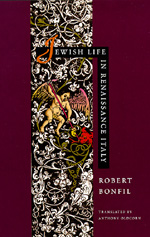 With this heady exploration of time and space, rumors and silence, colors, tastes, and ideas, Robert Bonfil recreates the richness of Jewish life in Renaissance Italy. He also forces us to rethink conventional interpretations of the period, which feature terms like "assimilation" and "acculturation." Questioning the Italians' presumed capacity for tolerance and civility, he points out that Jews were frequently uprooted and persecuted, and where stable communities did grow up, it was because the hostility of the Christian population had somehow been overcome.

After the ghetto was imposed in Venice, Rome, and other Italian cities, Jewish settlement became more concentrated. Bonfil claims that the ghetto experience did more to intensify Jewish self-perception in early modern Europe than the supposed acculturation of the Renaissance. He shows how, paradoxically, ghetto living opened and transformed Jewish culture, hastening secularization and modernization.

Bonfil's detailed picture reveals in the Italian Jews a sensitivity and self-awareness that took into account every aspect of the larger society. His inside view of a culture flourishing under stress enables us to understand how identity is perceived through constant interplay—on whatever terms—with the Other.

Robert Bonfil is Professor of Jewish History at The Hebrew University, Jerusalem. His extensive publications on the history of Italian Jewry in Hebrew, Italian, French, and English have earned him an international reputation. Anthony Oldcorn is Professor of Italian Studies at Brown University.

"The first fully developed and sophisticated statement of a position that goes against the main current of Jewish historiography for the past century. . . . The book will be of interest to scholars (beyond the specific field of Italian Jewish history) and to thoughtful general readers."—Marc Saperstein, Washington University