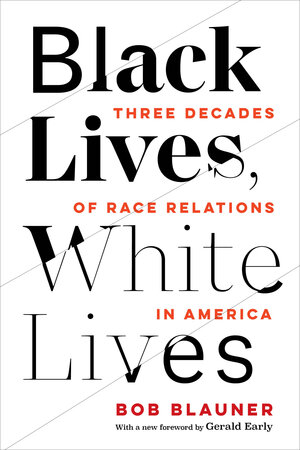 Now with a new foreword, this timely reissue features a remarkable collection of oral histories that trace three decades of turbulent race relations and social change in the United States for a new generation of activists.

One evening in 1955, Howard Spence, a Mississippi field representative for the NAACP investigating the Emmett Till murder, was confronted by Klansmen who burned an eight-foot cross on his front lawn. "I felt my life wasn't worth a penny with a hole in it." Twenty-four years later, Spence had become a respected pillar of that same Mississippi town, serving as its first Black alderman.
The story of Howard Spence is just one of the remarkable personal dramas recounted in Black Lives, White Lives. Beginning in 1968, Bob Blauner and a team of interviewers recorded the words of those caught up in the crucible of rapid racial, social, and political change. Unlike most retrospective oral histories, these interviews capture the intense racial tension of 1968 in real time, as people talk with unusual candor about their deepest fears and prejudices. The diverse experiences and changing beliefs of Blauner's interview subjects—sixteen of them Black, twelve of them white—are expanded through subsequent interviews in 1979 and 1986, revealing as much about ordinary, daily lives as the extraordinary cultural shifts that shaped them. This book remains a landmark historical and sociological document, and an exceptional primary-source commentary on the development of race relations since the 1960s. Republished with a foreword by Professor Gerald Early, Black Lives, White Lives offers new generations of scholars and activists a galvanizing meditation on how divided America was then and still is today.

Now with a new foreword, this timely reissue features a remarkable collection of oral histories that trace three decades of turbulent race relations and social change in the United States for a …

Bob Blauner (1929–2016) was Professor Emeritus of Sociology at the University of California, Berkeley, and an author who taught, lectured, consulted, and wrote on race relations. His work was funded by major groups such as the National Institute of Mental Health, the Rockefeller Foundation, and the Social Science Research Council. His other books include Alienation and Freedom: The Factory Worker and His Industry, Racial Oppression in America, and Resisting McCarthyism: To Sign or Not to Sign California's Loyalty Oath.

Gerald Early is Chair of African and African-American Studies and Professor of English at Washington University. He has written and edited numerous books, including This Is Where I Came In: Black America in the 1960s and The Culture of Bruising: Essays on Prizefighting, Literature, and Modern American Culture, which won the 1994 National Book Critics Circle Award for criticism.

PART ONE 1968
Surviving the Sixties

1. The Politics of Manhood and the Southern Black Experience
Florence Grier “My father was from Alabama”
Len Davis “Promised Land is just like the old plantation”
Howard Spence “I wouldn’t want to treat anybody like
I’ve been treated in Mississippi”

2. Whites on the Front Lines of Racial Conflict
Joe Rypins “Stokely Carmichael ain’t no better than me”
Gladys Hunt “You break your neck to do something,
and they give you a hard time”
Joan Keres “Sometimes you wish you were black”
Virginia Lawrence “I was the wrong color in my black
man’s eyes”

3. Four Black Women and the Consciousness of the Sixties
Florence Grier “I’m tired of being scared”
Millie Harding “This is no dream world, baby”
Vera Brooke “Those that came from a different social
experience I feared”
Elena Albert “Something happened in my childhood
I’ve never forgotten”

4. White Backlash: The Fear of a Black Majority and Other Nightmares
Maude Wiley “They’re afraid the colored people
are gonna move in and take over”
George Hendrickson “We’ve got the lowest, poorest type”
William Singer “We didn’t have a great sense of
racial awareness”
Bill Harcliff “It’s just a strong apartheid on the street”
Diane Harcliff “The whole racial thing makes me burst
with sadness”

5. Black Youth and the Ghetto Streets
Richard Simmons “White boys, they’re always innocent”
Larry Dillard “I would like to kill a white man, just to
put it on the books”
Sarah Williams “The marching and demonstrations
is stupid”
Harold Sampson “Denying you the right to be a man”

6. The Paradox of Working-Class Racism
Lawrence Adams “They’ve got the right to have every
human dignity that I have”
Jim Corey “If I can help a colored man without hurting
myself, I haven’t got anything to lose”
Dick Cunningham “My oldest daughter married a
black man”

7. Black Workers: New Options and Old Problems
Richard Holmes “The Negro don’t want to work”
Len Davis “The postal system has become a Negro-type job”
Mark Anthony Holder “Being a man is being part
of the world”
Jim Pettit “These people had been treating me bad all
my life, and I didn’t know it”
Frank Casey “They call me an instigator”
Carleta Reeves “I’d come home bitching and yelling”
Henry Smith “This was my means of retaliating”

PART TWO 1978–1987
Growing Older in the Seventies and Eighties

The Ambiguities of Racial Change

9. White Lives and the Limits of Integration
George Hendrickson “The man is a damn fool who
won’t change his mind”
Maude Wiley “That was such a strong time of change”
Virginia Lawrence “The world changed exactly the way
I was going”
William Singer “We’ve turned life itself into a quota
business”
Bill Harcliff “What I really do is live in a white
neighborhood”

10. Black Youth: The Worsening Crisis
Richard Simmons “The American black man is a
dying species”
Larry Dillard “Without [the Black Panthers], my
generation would be a different generation”
Sarah Williams “I had him and everything just changed”
Jim Pettit “Two counts against me: I’m black and I’m gay”

12. Men, Women, and Opportunity
Harold Sampson “I have not been able to achieve selfhood
through the civil rights movement”
Frank Casey “If they had gave me the green light”
Carleta Reeves “To grow and develop with the times”
Henry Smith “If I were a white guy . . .”

13. Keeping the Spirit of the Sixties Alive
Vera Brooke “The caring factor”
Joan Keres “The way that you view humanity and
the earth, those are the main things”
Len Davis “My whole damn culture’s gone”
Elena Albert “I as an individual will continue to resist”