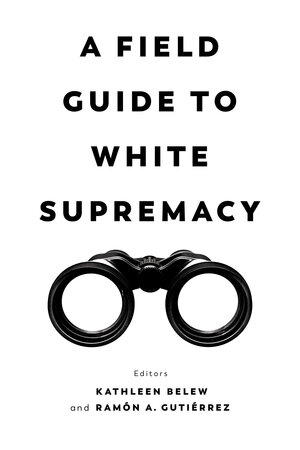 A Field Guide to White Supremacy

Drawing explicit lines, across time and a broad spectrum of violent acts, to provide the definitive field guide for understanding and opposing white supremacy in America

Hate, racial violence, exclusion, and racist laws receive breathless media coverage, but such attention focuses on distinct events that gain our attention for twenty-four hours. The events are presented as episodic one-offs, unfortunate but uncanny exceptions perpetrated by lone wolves, extremists, or individuals suffering from mental illness—and then the news cycle moves on. If we turn to scholars and historians for background and answers, we often find their knowledge siloed in distinct academic subfields, rarely connecting current events with legal histories, nativist insurgencies, or centuries of misogynist, anti-Black, anti-Latino, anti-Asian, and xenophobic violence. But recent hateful actions are deeply connected to the past—joined not only by common perpetrators, but by the vast complex of systems, histories, ideologies, and personal beliefs that comprise white supremacy in the United States.

Gathering together a cohort of researchers and writers, A Field Guide to White Supremacy provides much-needed connections between violence present and past. This book illuminates the career of white supremacist and patriarchal violence in the United States, ranging across time and impacted groups in order to provide a working volume for those who wish to recognize, understand, name, and oppose that violence. The Field Guide is meant as an urgent resource for journalists, activists, policymakers, and citizens, illuminating common threads in white supremacist actions at every scale, from hate crimes and mass attacks to policy and law. Covering immigration, antisemitism, gendered violence, lynching, and organized domestic terrorism, the authors reveal white supremacy as a motivating force in manifold parts of American life. The book also offers a sampling of some of the most recent scholarship in this area in order to spark broader conversations between journalists and their readers, teachers and their students, and activists and their communities.

A Field Guide to White Supremacy will be an indispensable resource in paving the way for politics of alliance in resistance and renewal.

Kathleen Belew is a historian of the present and leading expert on the white power movement, vigilante violence, and political extremism. Her first book, Bring the War Home, has been discussed on Fresh Air, Newshour, Frontline, and in the New York Times.

Ramón A. Gutiérrez has written extensively on the history of race, gender, and sexuality in Latin American and among Latina/os in the US, offering courses on these topics at the University of Chicago.

"Belew and Gutiérrez have compiled a superstar group of writers, commentators, and scholars who make sense of these vicious times of sophisticated hate. Collectively, they make the case that white supremacy—not ‘democracy’ or  ‘freedom,’ as some like to think—is the most dominant idea (or ideology) in the history of the United States."

"An important and timely collection in a moment of political and social polarization."

"This edited volume gives a clear and nuanced view of the different manifestations of white supremacy in the US. While modestly referred to as a manual by the editors, the volume shows the endurance of white supremacy in the past and the present, its embedment in its democratic institutions in the US, and ongoing manifestations."—Ethnic & Racial Studies

"This timely and well-curated book analyzes a broad range of white nationalist, nativist, and other violent authoritarian forces, demonstrating their centrality to the development of the US. Given the extraordinary events of the last five years in particular, in which white nationalist groups have emerged as a powerful force within US politics and social debates, the book could not be more urgent and necessary."—Daniel HoSang, author of A Wider Type of Freedom: How Struggles for Racial Justice Liberate Everyone


"A timely, important, and beautifully executed accomplishment. The uniformly high quality of the entries, the expansive scope of the histories under consideration, and the editors' success in marshaling essays that are diverse in voice and method but completely unified in spirit provide a cohesive start for civic discussion that connects the dots. Our civic life needs this, and the world would be a better place if our legislators, teachers, and journalists were to read it."—Matthew Frye Jacobson, author of Roots Too: White Ethnic Revival in Post-Civil Rights America

﻿"An invaluable resource for journalists, educators, policymakers, or people who simply want to understand the deep roots and wide reach of white supremacy in this country. This book is badly needed to dispel the myth that acts of racial, religious, and gender violence and hate exist in a vacuum. The authors bring their deep knowledge of white power movements to illuminate the dire threat we, as a nation, face from groups that are organized and determined to undermine the very idea of a diverse and pluralistic America."—Lulu Garcia-Navarro, host of National Public Radio's Weekend Edition Sunday

"A Field Guide to White Supremacy is as urgent an intervention as the problem it addresses. Incisive, erudite, and driven by a relentlessly democratic ethic, these essays are crucial to understanding a cruel, metastatic doctrine that looms among our most pressing national concerns."––Jelani Cobb, staff writer at the New Yorker and author of The Substance of Hope: Barack Obama and the Paradox of Progress
Read More >

Section I Building, Protecting, and Profiting from Whiteness

2. A Culture of Racism
Keeanga-Yamahtta Taylor

3. Policing the Boundaries of the White Republic: From Slave Codes to Mass Deportations
Juan F. Perea

4. The Arc of American Islamophobia: From Early History through the Present
Khaled A. Beydoun

6. The Pain We Still Need to Feel: The New Lynching Memorial Confronts the Racial Terrorism That Corrupted America—and Still Does
Jamelle Bouie

14. The Detention and Deportation Regime as a Conduit of Death: Memorializing and Mourning Migrant Loss
Jessica Ordaz

15. A Recent History of White Supremacy
Ramón A. Gutiérrez

17. The Alt-Right in Charlottesville: How an Online Movement Became a Real-World Presence
Nicole Hemmer

19. There Are No Lone Wolves: The White Power Movement at War
Kathleen Belew

Conclusion, by Kathleen Belew and Ramón A. Gutiérrez