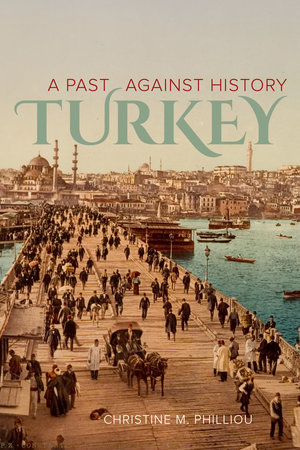 Turkey A Past Against History

From its earliest days, the dominant history of the Turkish Republic has been one of national self-determination and secular democratic modernization. The story insisted on total rupture between the Ottoman Empire and the modern Turkish state and on the absolute unity of the Turkish nation. In recent years, this hermetic division has begun to erode, but as the old consensus collapses, new histories and accounts of political authority have been slow to take its place.

In this richly detailed alternative history, Christine M. Philliou focuses on the notion of political opposition and dissent—muhalefet—to connect the Ottoman and Turkish periods. Taking the perennial dissident Refik Halid Karay as a subject, guide, and interlocutor, she traces the fissures within the Ottoman and the modern Turkish elite that bridged the transition. Exploring Karay’s political and literary writings across four regimes and two stints in exile, Philliou upends the official history of Turkey and offers new dimensions to our understanding of its political authority and culture.

Opposition, dissent, and the struggle for constitutional democracy in Turkey — and the U.S.?

By Christine Philliou, author of Turkey: A Past Against History Imagine living in a place where the political elite is deeply divided within itself. Contradictions between constitutionalism and empire are coming into …

Christine M. Philliou is Associate Professor in the Department of History at the University of California, Berkeley and author of Biography of an Empire: Governing Ottomans in an Age of Revolution.

"In this biography, Philliou offers a subtle and revealing history of the meaning of opposition."—Foreign Affairs

"Through her graceful prose, Philliou provides an insight into Karay’s humanity. . . . We should be grateful to Christine Phillou for allowing us to engage with the ideas of one of the most interesting personalities of Ottoman/Turkish letters."—Turkish Studies

“[Philliou’s] work successfully brings to life one of the most colorful muhalifler and shows his evolution from a broader perspective.”

"Past against History will be a much needed addition to all syllabi on Turkish and Middle Eastern studies, as well as on courses on nationalism and democracy in a global context. It should be an essential reading especially for graduate level classes because Philliou's masterful account encapsulates the best example of microhistory that can help the readers to rethink about all the major scholarly themes and topics in the historiography on Ottoman and Turkish studies."—Journal of the Ottoman and Turkish Studies Association

"A beautifully crafted exploration into the nature and significance of the oppositional figure in late Ottoman and post-Ottoman Turkey."—Ussama Makdisi, author of Age of Coexistence: The Ecumenical Frame and the Making of the Modern Arab World


"The first comprehensive study of opposition in the Middle East during the critical decades of empire-to-nation transmutation. A compelling and accessible investigation."—Hasan Kayali, author of Arabs and Young Turks: Ottomanism, Arabism, and Islamism in the Second Constitutional Period of the Ottoman Empire, 1908–1918

"Once again, Christine Philliou has written a book that changes the field of late Ottoman and early Turkish Republican history.  Skillfully using the figure of Refik Halit Karay as a foil, Philliou disturbs the typical approach to the transit from Ottoman Empire to Turkish Republic. Drawing on the concept of 'opposition' embodied in this 'anti-nationalist nationalist' figure, Turkey: A Past Against History productively—and provocatively—unsettles the lexicon of Turkish historiography."—Benjamin Fortna, author of The Circassian: A Life of Esref Bey, Late Ottoman Insurgent and Special Agent